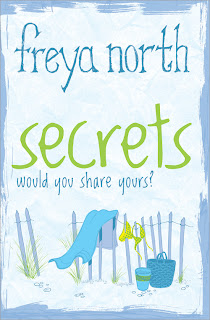 Joe has a demanding job building bridges and since he travels frequently he needs someone to care for his rambling seaside home while he's gone and walk his mutt, Wolf. He advertises for the position and is surprised when Tess shows up, packed and with her 18-month-old daughter in tow. Unconvinced that Tess is the one for the job but willing to at least give her a chance, Tess and her daughter move in and make themselves at home.

The beginning of their time together is rocky. Both Tess and Joe are unsure as to how they should act around one another, and it turns out that they are each keeping secrets from one another that are bound to come out eventually. However practice makes perfect, and the more time they spend together, the more used to each other they become, and romance just may bloom between the unlikely pair.

Secrets is the first book that I've read by Freya North, but it won't be the last. She writes interesting and engaging chick lit. Even though the general plot has been done before, North managed to inject something new into it. I didn't like Joe as much as I liked Tess and her daughter, but even he had some redeeming qualities.

I do feel that the book could have been a little shorter. The middle dragged a bit and I think that the story would have been just as good if it were 100 pages shorter.

Overall a fun and interesting book, perfect to curl up with to beat those winter blues. Despite the length issues I wouldn't hesitate to read another of her books in the future. My thanks to Sourcebooks as well as Netgalley for providing me with this review copy.
Posted by The Book Chick at 11:59 AM