Review: "It's a Man's World" by Polly Courtney 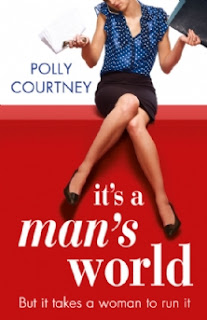 Alexa Harris loves a challenge and has found herself to be quite skilled at taking magazines with a declining reader base and making them profitable again. Nearing the end of her contact with a woman's magazine, she isn't surprised when she receives another offer of employment from the company that she's working for. After all, she took one magazine and made it profitable, and she knows that she can do it again. However she is surprised that they want her to head up a lad's magazine (think Playboy). The idea of wading into what is clearly a man's world intimidates her but the challenge is too much for her to resist.

Alexa's appearance at Banter is not met with enthusiasm by those who are currently employed by the magazine.  She even finds it to be a bit more of a challenge than she expected and must quickly become accustomed to the semi-nude women that grace the walls and televisions of the office. When she comes up with an idea that will increase the profit margins for the magazine she feels that the idea is foolproof, however when complications arise Alexa must consider if Banter magazine, and lad's magazines in general, are just a bit of harmless fun or if they are more damaging to women than she once imagined.

I loved It's a Man's World. Polly Courtney handles a controversial and fascinating subject with grace, presenting both sides of the story to the reader and allowing them to draw their own conclusions. After all, let's call men's magazines such as the fictional Banter what they are: soft-core pornography. I consider myself to be quite open when it comes to men and women's rights to look at whichever form of pornography they wish to (with obvious exceptions), however with the explosion of easily accessible pornography available to anyone with a computer, I start to wonder. Is this healthy, both for the women posing and the men with thousands and thousands of pornographic images at their fingertips? As the mother of three young boys I also wonder about them. Boys are exposed to pornography at such a young age now. How is that affecting their attitudes towards women? As someone is exposed to excessive amounts of pornography do women become merely objects, with little value otherwise?

I really related to the themes present in It's a Man's World. Courtney presents a well-balanced argument for both views of this issue, and she never comes across as being preachy or self-righteous. The writing is excellent and Alexa's struggles, both in the office and in her own mind, make this book compelling. I highly recommend this to women looking for more from their women's fiction. An enjoyable and thought-provoking read, and I thank the author and the publisher for sending me a complimentary copy for review.