Review: "Blow Me" by Lennie Ross 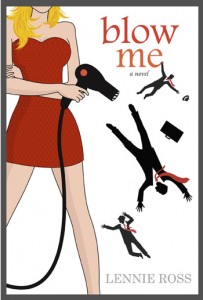 Rapidly approaching their forties, friends Skylar, Dawn, and Chloe seem to have missed the mark. Unmarried and childless, all three women have discovered that life doesn't always come with a happy ending guarantee. Skylar goes through men like she goes through underwear and when one romantic encounter in particular burns down her apartment, she finds herself homeless, jobless, and living in her car. Chloe is a French-Canadian actress living in the United States with dreams of making it big, or at least obtaining a green card to avoid being sent back to Canada, but neither marriage or a steady job seem to be on the horizon. Dawn is insistent on not running the family business, but she doesn't find her job as a matchmaker fulfilling and she seems no closer to finding her perfect man. Panicked that she's running out of time to procreate successfully, Dawn undergoes a procedure to freeze her fertilized eggs using a sperm donor for when she's ready to become pregnant. This off-the-wall novel explores dating, sex, and aging set in the backdrop of shallow Los Angeles.

I have to admit that I had a really hard time getting into Blow Me. The characters are all so self-centered that it's not surprising that they are each almost 40 and still unable to find love. Skylar uses men as her meal ticket. She literally sleeps around in search of her next meal or her next designer outfit and I couldn't help but compare her actions to those of a prostitute. Chloe just wasn't likable. She seemed desperate to find a man, any man, and often treats her friends like garbage in order to make herself feel better. Dawn was the only character that offered me some hope. She actually had integrity and goals for her life beyond getting laid, but she had the bad fortune to be saddled with such selfish friends.

Luckily for me the book picked up around the midway point. Dawn, the one character that I actually liked, begins to get her life together and seeing her working her way toward a happy ending encouraged me. Even Skylar, who I had a hard time liking from the beginning, seems to change her spots a little and becomes someone likable. The ending brought everything together quite nicely, and I have to say that I'm pleased at how things turned out.

If you can get past the fact that these women in their late 30's are still behaving as if they were in their early 20's, Blow Me is an enjoyable read. Lennie Ross is a talented writer and the stories of dating and love in Los Angeles certainly made for some entertaining reading. Thank-you to Chick Lit Plus Blog Tours for inviting me to participate.