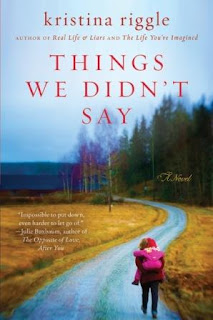 Casey fell in love with her fiance, Michael, fully aware of the fact that a marriage between them would make her the stepmother to his three children, Angel, a surly teenager, Dylan, the shy middle child, and Jewel, the innocent youngest child. Since Michael has full custody of the children Casey knows that she will be performing the parenting gig full-time, but that doesn’t mean that it will be easy.

After Angel discovers Casey’s journal, full of her private thoughts that she would never express beyond its pages, Angel begins to hate Casey with every fibre of her being. Angel also now knows one of Casey’s deepest secrets, one that she hasn’t even shared with Michael. When Dylan goes missing, and Casey needs to deal directly with the children’s flighty mother living in their home and wreaking havoc, Casey knows that the only way to deal with the currently unlivable situation in their home is to dig up long-buried secrets of her own and of others, and to begin to say the things that have remained unspoken for too long.

In The Things We Didn’t Say, Riggle brings together a cast of unique characters into one home and allows things to implode. Casey, our main character, is intensely private and still quite young, yet she has taken on the role of stepmother to three young children for the man that she loves. Michael, Casey’s fiance, is a perfectionist, never allowing for anything less than perfection in his life. Mallory, Michael’s ex-wife and the children’s mother is the wild card. Eccentric and damaged, she threatens to explode at a moment’s notice, leaving chaos in her wake. The children, Angel, Dylan, and Jewel are the casualties of the adult’s complicated dynamics, struggling for some sense of normalcy in their lives. These characters are part of what made this novel so compelling. Waiting to see how the adults would interact with each other, and what would happen when their secrets were revealed, made it impossible to put this well-written book down.

I also appreciated the ending. I love a good ending, and I love endings for various reasons. Usually my favourite endings are those where all of the characters end up living “happily ever after” in a way that was predictable from the beginning. Riggle chooses to end Things We Didn’t Say with a conclusion that is surprising, yet when I thought about it, I couldn’t see myself getting satisfaction from any alternate ending. In short, it was perfect.

Things We Didn’t Say is a thought-provoking look at modern families and modern love. I highly recommend it to anyone looking for a book that will stay with you long after you’ve turned the last page. Thank-you to TLC Book Tours for including me in this tour.