Review: "I'll Have Who She's Having" by Liz Fenton and Lisa Steinke 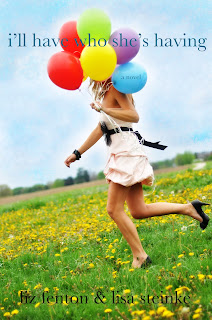 Kate has been depressed, her behavior bordering on stalker-ish, since yet another long-term boyfriend broke up with her. Her friends and family attempt to convince her that he wasn't "the one" for her, but she doesn't believe them. Done with her sister's whining and moaning, Kate's younger sister Kelly convinces her to join a volleyball class with her. Feeling that she has no choice but to go along with it, Kate agrees to give the class a chance.

Meanwhile, Kelly's been feeling less than happy about her life as of late. Despite the fact that she is married to a wonderful man, and the mother to an adorable almost one-year-old, Kelly feels unsatisfied. Ever since she became a stay-at-home mom she has felt out of place, and joining the local mother's group, the Hot Ta-Mommies, hasn't convinced her differently.

Both Kate and Kelly set their sights on their gorgeous volleyball coach as the one who is destined to get them out of their respective slumps. As they compete with each other for his affections, and fight towards their individual happy endings, they both begin to realize that they are looking for answers in all the wrong places.

I'll admit that I was apprehensive about reading I'll Have Who She's Having. I recently finished reading Liz and Lisa's latest book, The D Word (my review), and I absolutely loved it, so I was worried that this one wouldn't live up to the same standards. Thankfully, I was wrong. I devoured it in a day. The plot was fresh and often funny, and it made me want to continue to read to see what would happen. I really related to Kelly, the stay-at-home mom, since I work part-time so that I can be home with my three kids. Kelly is not used to being away from the corporate world and feels lost, and on top of that her marriage has become complacent and she's not quite sure if it can be rescued. I couldn't tell from the writing style what was written by Lisa and what was written by Liz because their transitions were seamless. And the ending? Spot on! I really loved it.

I did have one minor problem with I'll Have Who She's Having, but nothing that overshadowed my enjoyment as a whole. The book is written primarily from the alternating viewpoints of the sisters, Kate and Kelly. That really worked for me, especially when we viewed the same situation from two different viewpoints and were able to gain a new perspective of it. However there were a few chapters that were written from a perspective other than Kate or Kelly's, and with the exception of one of those, I didn't find that they particularly fit or contributed anything significant.

After having read and reviewed both I'll Have Who She's Having and The D Word I can recommend both with confidence to those who love chick lit and women's fiction, and who are looking for something new and interesting to read. I'm already looking forward to their next book!

I'll Have Who She's Having has been recently re-released and is currently available at the special price of only $0.99 in a variety of eBook formats. Buy The D Word for $2.99 and I'll Have Who She's Having for $0.99 and you're still spending less than I spend in a day on coffee (yes, I have an addiction). Buy one or both and you can win a ton of fantastic prizes in Liz and Lisa's HUGE ASS giveaway. Thank-you to BookSparks PR for providing me with this review copy.