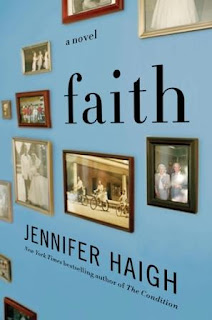 It's the spring of 2002 and the Boston papers are filled with horrifying accounts of trusted priests being accused of child molestation. Sheila McGann sees the accounts but thinks little of them, despite the fact that her own brother, Art, is the priest of a suburban parish. When her brother is accused of molesting a child that he has grown quite fond of, Sheila returns to her hometown in an effort to find out the truth behind the accusations, but she isn't expecting to uncover all of the secrets that she does in her quest for answers.

Faith examines a sensitive current issue with the sensitivity and grace that Jennifer Haigh is well known for. Child abuse, specifically by priests, is such a touchy topic and if you were to bring it up at a party, everyone would have a different opinion. I'll admit that it is an issue that I previously have not given a lot of deep thought to, giving it only a passing glance instead, but Faith truly made me think about this problem. It made me think about the children involved, the kinds of lives that priests lead and the training they require, as well as the possibility that some of these priests are being falsely accused.

After I read the last page I realized that Art's story is told from several different and interesting perspectives, most coming from within the same family. We see how the accusation affects Art's devoutly Catholic mother, his non-church-going sister, and his brother, Mike, a man with three sons. We discover how the accusation affects Art himself, and we even get a little perspective into the life of the woman who accuses Art. These widely varied opinions offer a variety of different viewpoints into this single situation. How will Art's mother react to the accusations? How will his brother, a father of boys, react differently? Who will turn against him, and who will remain loyal to the man that they know?

More than just a study of religion and the happenings in the Catholic Church right now, Faith is an observation of one very difficult situation and the various reactions that it elicits in the people who know Art the best. In that way it is an examination of human nature and that makes Faith a must-read for anyone who likes their fiction to be thought-provoking.