Review: "The D Word" by Liz Fenton and Lisa Steinke Spiritual Counselor and mother-of-one Jordan Daniels is navigating the waters of both divorce and single motherhood. She made the decision to leave her husband, Kevin, when she realized that their marriage had grown stale and she became determined to find herself on her own. Months later, Jordan is still frozen in time. She refuses to hang her clothes on her ex-husband's side of the closet despite the fact that Kevin has clearly moved on, and she has done nothing to begin to find herself. If only she could see into her own future...

Meanwhile Elle, a single-and-loving-it woman struggles with her decision to call off her wedding 33 days before it was set to happen. Although she can't pinpoint why the thought of marriage to Chase made her uncomfortable, she knows deep down that it wasn't meant to be. Unfortunately her best friend Taylor, her ex-fiance's sister, is unable to see Elle's side and Elle's guilt continues to mount.
One day, while on assignment for the paper that she works for, Elle meets a handsome man at the dog park, and everything for both Elle and Jordan begins to change.
I just finished this book, as in literally this morning (yes- I'm like every other mother on the planet with not enough time to read!) and I have three words for you: I. Loved. It. I must warn you that I may get a little gushy here, but seriously ladies, this is a must-read for any chick-lit or women's fiction lover. If you didn't know that this book was written by two authors, you wouldn't be able to tell just by reading it. The transitions are seamless and Liz and Lisa's voices blend beautifully. I couldn't tell which part was written by whom purely by the writing alone. I'm not surprised that the authors have been friends for over 20 years.
Another thing that I loved about The D Word was the fact that I truly did not know what was going to happen until I got to the end. In fact, I didn't even really know what I wanted to happen. I was wavering because I liked both of our main characters and wanted them both to have happy endings, but I didn't know if one could have a happy ending without the other. Many times, while reading chick lit, I can predict the ending a mile away and it is so refreshing to read a book that managed to keep me in suspense until the end. Speaking about endings, this one was fantastic. It had me laughing out loud and "aww"ing at the same time! 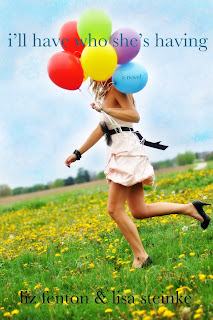 I can't recommend this one to women's fiction and chick lit lovers highly enough except to tell you that this is a must-read (and it would make a perfect beach book!). The D Word is available in eBook format right now for $2.99 USD through Amazon and a variety of other online retailers. And if you buy it right now (go ahead, I'll wait), you can enter Liz and Lisa's HUGE ASS Giveaway to win a ton of great prizes.
While we're on the topic of Liz and Lisa's books, why don't you check out their 2009 debut novel I'll Have Who She's Having. Not only does it have a fantastic new cover, but it is only $0.99 right now! It doesn't get much better that that! I'll be reviewing this one next week, so keep an eye out here.
Thank-you to Crystal at BookSparks PR for inviting me to participate in this tour. All opinions expressed above are 100% my own.
Rating: 5 stars out of 5
Challenges: 2011 100+ Reading Challenge, 2011 E-Book Challenge
Posted by The Book Chick at 8:32 AM