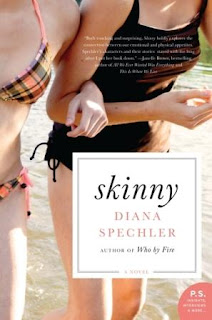 One of the first things that attracted me to Skinny by Diana Spechler was that it was told from the point of view of a character with major weight loss issues. I've struggled with my weight my whole life and I can always appreciate a character who understands the ongoing battle. However Skinny was about so much more than a person with weight issues. Gray Lachmann is 26 and dealing with the aftermath of her father's death. Not on the best of terms with him when he died, Gray feels a lot of guilt and responsibility for how things ended between them. Her relationship with her comedian boyfriend, Mikey, has suffered as a result of all of her issues, and Gray has turned to food to fill the void that she feels.

When Gray is read her father's will she begins to unravel a mystery which includes a teenage half-sister, Eden, who she wasn't previously aware of. When Gray finds out that Eden will be attending fat camp in the summer, Gray manages to wrangle a position as a counselor at the same camp. Gray hopes to get to know her sister, lose weight, and take control of her life again, but she's not expecting the fact that her co-counselor will be filled with venom or that Eden will take virtually no interest in her at all. She also isn't expecting to meet Bennett, the personal trainer who consumes her thoughts during her eight weeks at fat camp.

Skinny was so much more than I anticipated. Gray is a darker character than I was expecting, yet she was so richly portrayed that I couldn't help but feel something for her. She is so confused, so heartbroken, so laden with guilt. Food is her solace and her friend, but at the same time food is her mortal enemy. Gray's unhealthy obsession with food only masks the pain that she is feeling inside. She has so many conflicting feelings battling to get out and her inability to deal with these emotions only worsens as the summer carries on.

Compelling and often shocking in its honesty, Skinny is one of those books that has the power to change how people think about others. It may make you think twice before you judge the next person who walks down the street solely on how they look; a thought-provoking novel with lots of unexpected twists.