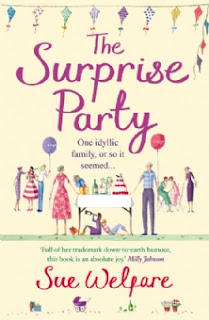 Suzie, a married mother of two impressionable girls, and Liz, her minor celebrity sister, manage to put aside their differences to throw a surprise 40th anniversary party for their parents. Little do they know that they are the ones about to be surprised! It turns out that their mom and dad have been keeping a secret from them since they were little, and it's all about to come out of the woodwork. Meanwhile, Suzie's daughter Hannah is trying to navigate her way through her first real crush, and Megan is trying to figure out her place in the family as the youngest child. Suzie's keeping a secret from her husband while trying to keep her marriage from collapsing around her, Liz is trying to remain popular in the ever-changing world of television, and Liz and Suzie's aunt Fleur is struggling with a romantic entanglement of her own. All this makes for one very surprising surprise party.

When I first realized that The Surprise Party took place over the course of one day, I was a little skeptical. I've read books with that format before and they don't always flow well for me. Sue Welfare's book was the exception. I thoroughly enjoyed it and I couldn't help but rush through it so that I could find out what happened next. Welfare has enough happen to make the plot truly interesting, but she doesn't make it unrealistic in the sense that you end up thinking that there is no way that all of that could happen in one day. Welfare covers a variety of interesting topics as well including teenage alcohol use, finding love at an advanced age, first love, divorce, and cheating.

The characters in The Surprise Party were endearing and likable, and I really wanted to see them all end up with their own happy endings. Suzie and Liz's parents were surprise favourites of mine. They were eminently lovable, despite all of their very human flaws, and had personalities all their own.

With a fast-paced and interesting plot, lovable characters, and a thoroughly enjoyable ending, The Surprise Party was a winner for me. I'll definitely try to track down Sue Welfare's back list and I'll be keeping my eyes open for her future releases as well.