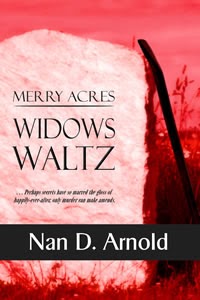 Georgiana Duncan insisted that she and her husband, Daniel, move to the retirement community of Merry Acres when they reached "that" age. Now, with few prospects for making new friends, a husband too busy gambling or playing golf to stick around for long, and a money-pit of a house to fix up, Georgiana isn't too sure. She becomes even more concerned about her decision to move there when several women's husbands end up murdered. Are the newly minted widows in Merry Acres hiding something, or is there some other force at work here? And would Georgiana really be so unhappy if her own husband were to mysteriously kick the bucket?

Merry Acres Widows Waltz was certainly a departure from my usual reading selections. It had murder, intrigue, and a breathless (yet satisfying) ending. I couldn't help but feel some pity for our main character, Georgiana. We find her at the beginning of the novel uncertain as to why she was so determined to move to Merry Acres in the first place. Her husband certainly hasn't changed since the move, their house continues to drain their financial resources, and the women in the community seem distant and just a little unusual. When the men living in the community begin meeting their untimely demise, one by one, Georgiana is really questioning her decision to become a part of the retirement community. But with a mystery on her hands, and the free time to solve it, she begins chasing down some surprising answers.

Well-written, fast-paced, and clever, Merry Acres Widows Waltz is a must-read for anyone who enjoys curling up with a good mystery.