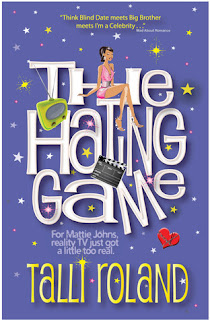 Mattie Johns prides herself on the fact that she doesn't need a man to survive. She has a strict love- 'em- and- leave- 'em personal philosophy that has worked quite well for her in the past. However when her business starts crumbling because an ex-boyfriend has stolen most of her clients and the bills start piling up, Mattie signs up to be on a dating show where she just has to stick it out for two weeks in order to become the winner of 200,000 GBP. What Mattie doesn't count on is the fact that the person behind the dating show has absolutely no qualms about destroying her in order to create good TV. Or that there is a twist behind the show that brings Mattie face-to-face with four of her exes, including "the one that got away". Will Mattie leave with the prize money in hand, or will she come out with something far more valuable?

This is Talli Roland's first book and I certainly hope that we'll be seeing more from her in the future. Roland has created realistic characters that I couldn't help but root for. Mattie was tough-as-nails on the outside, but as the reader gets to know her better we are able to see the vulnerabilities that lay just beneath her surface. The supporting characters were also endearing, especially Kyle (the one that got away) and Nate (the Executive Producer of the reality show with a concience). The plot was fast-paced and entertaining and I couldn't wait to find out what would happen next.

My only complaint, and it is a small one, is that the ending felt a bit abrupt. It ended exactly the way that I hoped that it would, but I would have liked it to be a slightly longer conclusion. However, I would like to see the main characters in The Hating Game return in another book (sequel anyone?).

I can readily recommend this book to anyone looking for a fast-paced and fun read with relatable characters and an interesting plot. Talli Roland is a welcome addition to the chick lit genre! My thanks to the author for providing me with a review copy.