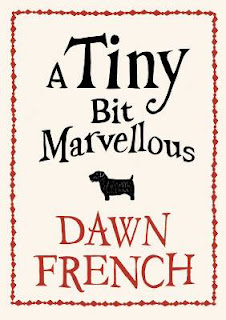 A Tiny Bit Marvellous is the story of a typical family in crisis. Mo is a 49-year-old mother of two children, neither of whom she understands, which is rather embarassing considering the fact that she's a child psychologist. Dora is seventeen and can't wait to escape to university. As far as Dora is concerned her mother understands absolutely nothing about her, and she had no idea why her mother insists on continuing her pathetic attempts at conversation. Peter is Dora's sixteen-year-old brother. Peter insists on being called Oscar due to his obsession with Oscar Wilde and when he develops a school- boy crush on his mother's new associate, nothing good can come of it.

Add in their quiet husband and father and a dog named Poo and we have a recipe for hilarity- and disaster.

For the most part I liked this book. Each chapter was narrated by either Mo, Dora, or Peter, and I appreciated the different points of view. In one chapter Mo would be recounting a conversation that she had with Dora that she thought went rather well, and in the next we would hear from Dora that this same conversation was disastrous. Since I clearly remember my own angsty teenage years I found Dora's voice to be particularly authentic and her outlook relatable. I had less in common with Mo, but I still enjoyed her part of the story, considering that I'm a parent (thankfully, though, I'm not a parent to teenagers right now). I had some problems relating to Peter. He was a unique individual, which made for some entertaining reading, but there was nothing about him that made him relatable to me, so I cared about his story less.

Although I enjoyed this book, especially the interesting (and rather shocking) conclusion, I have to admit that my biggest problem with the book was the fact that it was not incredibly memorable. I read it, I liked it enough, but it's not a book that I will remember much about a year after I read it.

If you enjoy books about dysfunctional families and if you enjoy stories filled with British flair, you'll enjoy A Tiny Bit Marvellous. I just wish that it stuck with me for a little longer after I read the last page.

Rating: 3 stars out of 5
Recommended to: Readers who like stories about dysfunctional families, those who enjoy books set in the UK
Challenges: 2010 100+ Reading Challenge, New Author Challenge 2010
Posted by The Book Chick at 5:29 PM