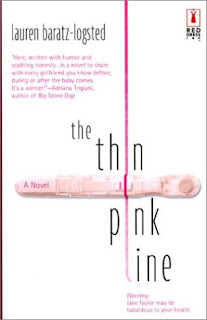 Jane Taylor is pregnant. Or at least she thinks she is. A couple of days late, she can't help but share the great news- with her best friend David, with random strangers, and with her unable-to-commit boyfriend, Trevor. Suddenly obsessed with pregnancy, Jane gets a glimpse into how the other half lives. Men hold open doors for pregnant women, they have a certain glow, and she can't wait to be a visible part of that community. When Jane finds out a couple of weeks later that she is most certainly not pregnant, she is unable to give up the illusion. Despite the fact that her flat stomach remains flat, she continues with the charade at the office and at home, desperate to be pregnant even though she really isn't.

I picked this one up a couple of weeks ago at one of my favourite bookstores. Light and fun chick lit never fails to amuse me, and I've been reading a quite a bit of it lately while we get ready for the Christmas season. I love books that entertain me, and maybe even make me laugh. Jane Taylor is a fun protagonist. She reminded me a little of Becky Bloomwood from the Shopaholic series. Jane gets herself into this impossible situation by lying to almost everyone around her, and once she discovers how hard it is to keep up the illusion of being pregnant, she's in too deep to simply tell the truth. I was curious as to how Lauren Baratz-Logsted would have this one play out. How would Jane maintain the illusion of her pregnancy? When would the truth come out? At the beginning I couldn't see how the plot would work out in a way that wasn't too far-fetched, but I was pleasantly surprised with what she came up with.

There was also a rather fun romance thrown into the mix of this as well. I really liked Tolkien, the love interest, but to be honest I wish that there would have been a few more scenes between the two of them as the romance developed. I felt a little blindsided by it all- one moment the two are just meeting for the first time, and the next moment they are in love. It was enjoyable nonetheless, but I would have liked the developments to be a little more gradual.

Overall, this was a fun read, great for when you're looking for something to read that isn't too heavy, but isn't dumbed down either. There's a sequel to The Thin Pink Line called Crossing the Line and I'm having a little trouble tracking one down from my independent bookstore. Does anyone have a copy of it that they would like to trade?