Review: "The Other Family" by Joanna Trollope 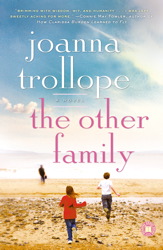 When Chrissie's partner, once-famous pianist Richie Rossiter, dies suddenly of a heart attack Chrissie has to deal with more than just grief. She also needs to confess to her daughters that she and their father were never really married, despite Chrissie's desire to be. In fact, Richie never divorced from his first wife, Margaret, the woman whom Chrissie stole him away from all those years ago. Apparently she didn't steal him away entirely- in his will he leaves his legal wife and his grown son some particularly meaningful personal effects.

Chrissie and Margaret, along with Richie's three daughters and his son, find themselves in the middle of a very complicated situation. Resentment abounds as a treasured piano moves from one household to another and as both Margaret and Chrissie try to move on with their lives. The Other Family is the story of how complicated life's relationships can be.

One thing I have to say for The Other Family is that it grabbed me from the beginning. The reader is told right away that Richie and Chrissie were never legally married, despite the fact that they have spent the last 25 years together and have three daughters together. This scenario raises that complicated question: is marriage all that matters? Or is creating a life and family together what's important? Since my now-husband and I lived together for seven years before tying the knot, and we had our children during that time as well, this was a question that definitely grabbed my attention. I think that it is one of those questions that will have a different answer depending on who you're talking to, and I appreciated that Joanna Trollope addressed it.

I actually liked all of the characters that Trollope introduced throughout the book, and she does a great job of telling this story from both sides. I felt sympathy for both Margaret and Chrissie, and I felt a little disdain at times for both of them as well. Although the children's stories are not all delved into with much detail, I felt sympathetic towards them as they came to terms with their father's death and his loyalties to the "other family". The one character that I didn't like, and whom we never meet, was Richie. I thought that it was rather sneaky that he amended his will without Chrissie knowing, and he seemed like the kind of guy who wanted to have his cake and eat it too. He didn't want to be married to Margaret anymore, but he didn't want to be divorced from her either, and this wasn't fair to Chrissie or to Margaret.

Overall I really enjoyed this book and the questions that it raised. I appreciated the complicated family dynamics and the way in which this story was told. This was the first book by Joanna Trollope that I've read, but it won't be the last.

Rating: 4 stars out of 5
Recommended to: Fans of women's fiction and stories about families
Challenges: 2010 100+ Reading Challenge, New Author Challenge 2010, RYOB Challenge 2010
Posted by The Book Chick at 3:00 AM