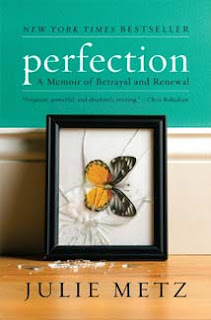 It's 2003 and Julie Metz is a wife and a doting mother until her husband suddenly collaspses and dies on their kitchen floor. Suddenly she's a grieving widow and a single mother, unable to see through the fog that surrounds her. As she attempts to move on following Henry's death, she finds herself face to face with a truth that will change her life- Henry had been cheating on her. Not only had he cheated on her once, but several times, and she had chosen to ignore the truths that had been there all along.

Devastated to find out that her memories of her late husband would be irrevocably tainted, and even more devastated to find out that one of the women that Henry had cheated on her with had been a friend, Julie sets out to contact the other women who had been a part of Henry's life to try to make sense of it all. Perfection is her recollection of that very difficult time in her life, and it chonicles her journey towards healing.

I find that my feelings on this book were mixed. On one hand I found this book fascinating and incredibly honest. I can't imagine what it would be like to not only lose your husband unexpectedly at a young age and subsequently to find out that the man that you are mourning had devastating secrets that change your opinion of him. I don't know how I would have dealt with this particular situation. I also feel that Julie Metz was very brave to share her journey with the world, and in such an honest way. This memoir seems to hold nothing back from the reader- we share her good days and we share her bad days.

On the other hand I couldn't help but disagree with the way that Julie seemed to jump into bed with any willing man while she was on her journey towards healing. Perhaps that is just my own bias coming through, but I truthfully can't imagine wanting to sleep with anyone so soon after my husband died. Her encounters with the opposite sex often distracted me from what I felt was the point- meeting the women who Henry had slept with and coming away from the situation with the truth and the ability to move on. I also can't help but wonder what her daughter will think of this when she's old enough to read it. It's one thing to lose your father at such a young age, but another thing entirely to have to read about his infidelities and your mother's sexual exploits along the way.

Despite my mixed feelings, I still enjoyed Perfection. The story flowed, and I found myself fully immersed in the story. The topic may not be the most pleasant of topics, but the honest way in which Julie Metz tells her story makes it worthy of a read.

Rating: 3.5 stars out of 5
Recommended to: Fans of memoirs, those who enjoy women's fiction (the plot could read like a fictional story if you didn't know that it was true)
Challenges: 2010 100+ Reading Challenge, New Author Challenge 2010

Thank-you to BookSparks PR for sending me a copy of this book in exchange for my honest opinion.
Posted by The Book Chick at 9:24 AM