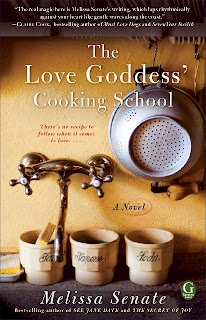 Holly Maguire's grandmother Camilla possesses the gift of sight. Known as the Love Goddess of Blue Crab Island, Camilla is able to make predictions based on feelings, and is known throughout the island for her talents. Holly doesn't receive her fortune until she is sixteen, at which point her grandmother tells her that her true love will like sa cordula, an unappetizing Italian dish made from intestines. Holly dates her share of the wrong men for her, none of whom like sa cordula, and has given up on finding "the one" when her current boyfriend, John, breaks things off with her.

Heartbroken, Holly returns to Blue Crab Island and is devastated when her beloved grandmother dies in her sleep a few days after her arrival. After the funeral Holly finds out that Camilla has given her the house and the Italian cooking business that goes along with it. Craving both a change and some peace in her life Holly is determined to keep the business going, despite the fact that she does not possess her grandmother's talents in the kitchen.

As Holly struggles to reconnect with her passion for cooking, which left her when she was a little girl, she decides to go ahead with teaching the cooking class that her grandmother had already signed people up for. As the class, filled with people battling their own personal demons, learns how to cook Italian food they also learn valuable lessons about themselves. Holly falls for the father of one of her young students, but will he have room in his heart for her? And will he like sa cordula?

It has been a long time since I've read any of Melissa Senate's books, but the one that I did read I loved, and I was excited to win a copy of this from Chick Lit Central. The Love Goddess' Cooking School was a truly enjoyable read. It had all of the elements that I look for when choosing a book to read: romance, a well-written story, supporting characters that you can't help but love, and a compelling plot. I loved how the cooking class that Holly teaches ties everything together. The people there were all in some sort of personal pain and hoped that cooking would be therapeutic. I adored the ragtag bunch, and cheered as they all started to get their personal lives in order.

The story wasn't all sunshine and rainbows- the characters in the book had to work to overcome some pretty daunting obstacles, and Holly has to practice intensely before she can cook a passable Italian dish, and this is one of the things that made this book so readable. Life is filled with obstacles and heartbreak, and it was refreshing for them to be tackled so realistically.

I can't think of one thing that I didn't enjoy about this book. I read it in about twenty-four hours, unwilling to put it down for any extended length of time. I highly recommend The Love Goddess' Cooking School to anyone looking for an addictive read, but I warn you not to start it until you have the time to finish it!

Rating: 5 stars out of 5
Recommended to: Fans of women's fiction, fans of books that involve cooking and food, fans of Melissa Senate's other books
Challenges: 2010 100+ Reading Challenge, RYOB Challenge 2010
Posted by The Book Chick at 3:00 AM