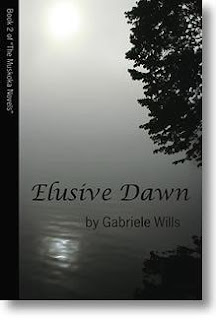 Back in April I reviewed The Summer Before the Storm by Gabriele Wills (my review), and I was so taken with it that I couldn't wait to read the sequel, Elusive Dawn. Since I has other review commitments at the time, I decided to wait, and I finally had the chance to pick up the second book in this series a couple of weeks ago.

Elusive Dawn starts off where The Summer Before the Storm ends. The Great War has begun in earnest, and Victoria Wyndham is overseas and determined to become an abulance driver to aid her country and their fight. At the time it was difficult for women to do any sort of dangerous job during the war. Women were expected to come overseas to be a nurse if anything, and most women were encouraged to stay home and raise funds or gather supplies for the men fighting overseas. Becoming an ambulance driver was frowned upon, but that suits our spunky heroine quite well.

*Spoiler Alert* Victoria's husband, Chaz, is a celebrated airplane pilot, and he's earned many medals, but the one thing that he has lost is his wife's trust. After an unimaginable betrayal, Victoria and Chaz remain estranged, although Chaz would do anything to prove to his wife that he's sorry.

As the war continues many of their Muskoka friends join the war efforts overseas, and the group suffers firsthand the horrors of war. As the young people spend their days facing things worse than they could have imagined the previous summer, they must all mature faster than their young years if they want to come out of the war alive.

Just like The Summer Before the Storm, Elusive Dawn had me riveted from the beginning. Once again Gabriele Wills has done an almost superhuman amount of research and has managed to combine her knowledge into an incredibly readable book about the horrors of war. The descriptions of the scenes and the terrible things that everyone encounters felt very real, and since I started reading this on Remembrance Day it helped me to relate more to the soldiers who were sent overseas so many years ago. That's something that Canada has lost, I think. We haven't lost respect for our Veterans, but rather we have lost true understanding of the horrors of war. Despite the fact that some of our soldiers remain overseas fighting for our country we remain very much unaffected by war at home. I appreciated this new perspective.

The characters are every bit as relatable as they were when we first met them. Victoria Wyndham remains my favourite because of her spunk and her rebellious streak, but all of the characters that we meet, both new additions and old, are likable, and those who are not likable, are relatable in some way. Once again there is quite the cast of characters so at times I needed to flip back a few pages to remember who was who, but Wills does a great job of gently reminding her readers who everyone is. Even though the book is largely set overseas where the war is taking place, I loved that some of the scenes were set back in Muskoka with the characters who weren't fighting in the war. I particularly enjoyed reading Phoebe's story, a troubled girl who is a sister to one of the more central characters. I hope that her story continues in the final installment of the series.

The fact that I enjoyed Elusive Dawn so much is a compliment to the author, as I don't tend to gravitate towards historical fiction all that often. The more serious sections about the war are interspersed with lighter and more personal fare, so that we can continue to get to know the characters that we met in the last book. Wills has written a worthy follow-up to The Summer Before the Storm, and I eagerly anticipate the release of the final book in the series.

Rating: 4 out of 5
Recommended to: Fans of historical fiction and Canadian literature
Challenges: 2010 100+ Reading Challenge, The Canadian Book Challenge 4
Posted by The Book Chick at 11:05 AM