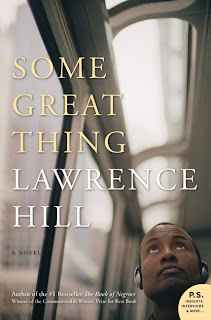 Before there was the award-winning The Book of Negroes, there was Some Great Thing, Lawrence Hill's debut novel. Recently re-released, Some Great Thing tells the story of Mahatma Grafton, a young, arrogant black man who tries his hand at writing for the newspaper The Winnipeg Herald. Lawrence moves back home to live with his father, Ben, while he takes a stab at journalism, but he ends up getting far more than he bargained for as he discovers that his hometown is brimming with racial tensions as well as tensions related to the issue of French-language rights in Manitoba.

While dealing with his boss' unusal take on ethics, as well as his smarmy competition, Mahatma must decide if it is more important for him to get ahead at his job or if he should remain true to himself instead.

Some Great Thing reflects on a time period in Canada that was rife with unrest. The subject matter certainly doesn't shy away from the controversial issues that were prominent in the 1980's. Hostile Anglo-French relations are covered, as well as the racial issues still prominent at the time. In spite of the fact that the subject matter is not always pleasant and is often deeply controversial, Hill writes with humour and an abundance of wit, making his debut novel a fast-paced, compulsive read.

Especially noteworthy is the fact that Hill created a large cast of characters that seemed to jump off the page. They are all flawed and human, yet incredibly endearing. I wanted to have most of them over for dinner. My favourite was Ben, Mahatma's elderly father, a gentle man with deep convictions and a love for his son. I loved the fact that he slept better when his son was home- that's fatherly love. I also loved YoYo, the journalist from Cameroon who was visiting Canada for a year and found everything about Canada fascinating. Chuck, one of Mahatma's most genuine friends at the newspaper, had a wisdom and raw honesty that I could almost feel.

I savoured the final pages of this clever novel with a smile on my face, and highly recommend it to anyone looking for a book that isn't afraid to tackle difficult issues with sensitivity, wit and charm.

Thank-you to HarperCollins Canada for providing this review copy in exchange for my honest opinion.
Posted by The Book Chick at 5:53 AM