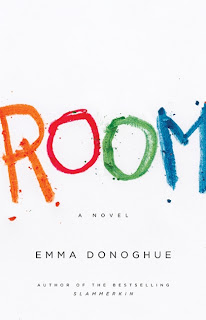 It happens all of the time. I read a book that's been getting a lot of hype or that has been nominated for an award and I can't help being disappointed. Usually the problem is that I slog through complicated wording or an uninteresting plot and wonder what the people who decided that this book was worthy of an award were thinking.

Longlisted for the Man Booker Prize for Fiction, Room by Emma Donoghue was blessedly an exception to my past experiences. It tells the story of Jack and his Ma, imprisoned in an 11 x 11 ft. garden shed in the backyard of Old Nick. Ma was only 19 and a college student when she was abducted from a parking lot. When she woke she was imprisoned inside this tiny room, with only a skylight for light and limited resources. Two years after her abduction she gives birth to Jack, who becomes the light in her very dark life. As the book opens, Jack is turning 5. Ma knows that she cannot continue to let this bright and cheerful little boy stay imprisoned in Room forever- his curiosity is growing, as is her desperation to escape. What follows is the heartwrenching story of how a mother and her son survive odds that seem insurmountable.

I absolutely adored this book. Sometimes when I'm reading something that isn't quite coming together for me I find myself counting the pages to see how many more I have to read until I'm done. I didn't care how many pages were in Room. I would have happily read this book for another 321 pages. Some people have mentioned that they would have preferred this book to have been written from Ma's perspective. I can certainly see how this could have been interesting, but writing it in the voice of 5-year-old Jack brought something entirely unique to the pages. Donoghue capture's the voice and thoughts of a 5-year-old child perfectly. Jack has names for everything within Room. There's Meltedy Spoon, which was left too close to a hot burner on the stove one time and looks funny. There's Rug, rolled up on the floor. There's Skylight and Roof and Bed and Duvet. What made making Jack the narrator especially fitting is the fact that for Jack, he's not in captivity. He's never known the outside world, and in fact he is convinced that he and Ma and Old Nick are the only "real" people on the planet. As far as he knows, everything else that exists only exists on television. He's got his Ma, and Sundaytreat, and lots to do, and he's truly happy.

In an effort to prevent spoiling this novel for anyone who hasn't yet had the chance to read it, I'm not going to go into further detail, although I would like to. I will say that I didn't know how Donoghue would be able to end the novel in a way that would both make sense and satisfy the reader, but she did. The ending was perfect. I'll also say that this novel will stick with you long after you read it. I finished it yesterday morning, but I lay in bed last night just thinking about it. It's not something that I normally do, especially if a novel is mediocre at best. Even if this isn't a genre that you normally read, I strongly encourage you to give Room a chance.

Rating: 5 stars out of 5
Recommended to: Just about anyone
Challenges: 2010 100+ Reading Challenge, 2010 Support Your Local Library Challenge, The Canadian Book Challenge 4
Posted by The Book Chick at 4:02 AM