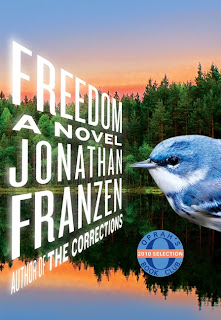 Described as "an epic of contemporary love and marriage", Franzen's latest novel, Freedom, follows the Berglund family, dad Walter, mom Patty, daughter Jessica and son Joey, as they contemplate their past and move towards their future. A former athlete, until a fall broke not only her body but her dreams of playing as a career, Patty struggles with being a suburban mother and housewife, especially when the object of her teenage desire still plagues her thoughts. Walter is a nature-lover at heart but somehow has found himself employed by the coal industry. Jessica is content to get her education and experience first-time love, and Joey has gotten himself deeply involved with the highly unsuitable neighbor next door. The Berglunds all continue to make mistakes and make progress as they explore the meaning of the word "freedom".

I need to start by saying that I read this despite Oprah's recommendation. I know that having an Oprah seal of approval on a book is huge, leading to big sales and unimaginable publicity, but I tend not to read a book when she's recommended it. Nothing against Oprah, but who is she to tell me what to read? (Uh-oh, my teenage rebellion is coming out a little here. I thought that I was done with that!). I primarily read it for two reasons. 1. I have read many good reviews written by bloggers whose opinions I respect. 2. I followed the controversy surrounding Franzen's review in the New York Times, when Jodi Picoult and Jennifer Weiner (correctly) pointed out the NYT penchant for "white male literary darlings". Since I found the controvery interesting, I thought that by reading the book I would be able to have an intelligent opinion on the whole thing. Since I have read all of Jennifer Weiner's work, as well as one of Picoult's, I felt that I would have to give Franzen's Freedom a read to decide if I thought that it was worthy of the hype.

I didn't love this book at all. I won't be spilling its praises the next time I'm talking books. I won't be telling everyone how reading this novel changed my outlook on life. Frankly, I just didn't get it. Perhaps this makes me ignorant. Perhaps I'm best sticking to those kinds of books that I enjoy the most, but this just wasn't the one for me. I found the female characters, especially Patty, unrealistic. At no point was I thinking "Wow. Franzen really gets women". Quite the opposite. I found Freedom boring. And long. I think that he could have said the same thing in a quite a few less pages. For the most part I found the characters unlikable, which didn't help me to relate to them. Patty was whiny, Walter had very little visable backbone, and Joey acted like a spoiled brat.

I can't say that Freedom was all bad. The first chapter was entirely engaging. The writing was above average, and I found the dialogue believable (one of my pet peeves is bad dialogue). Although I pretty much disliked the first three quarters of the novel, I did enjoy the last quarter. I found that the characters underwent transformations that made them entirely more likable and relatable. Oh, and there was one particularly great quote towards the end:


"Every year at tax time, it seems as if the year just past was shorter than the year before it; the years are becoming so similar to one another." (p. 535)

Overall this wasn't the novel for me, personally. In my opinion, it is not entirely worthy of the hype. There are hundreds who disagree with me on this one, and there are those that feel much the same way as I did. I would venture to say that this is one that you need to read for yourself and form your own opinion about, because the opinions are going to be drastically varied.

Rating: 3 stars out of 5
Recommended to: Fans of Franzen's previous fiction
Challenges: 2010 100+ Reading Challenge, New Author Challenge 2010, 2010 Support Your Local Library Challenge
Posted by The Book Chick at 7:37 AM