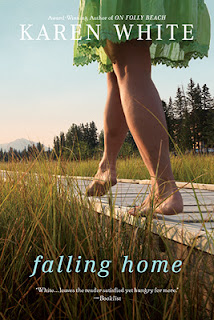 Cassie hasn't returned home in 15 years- not to see her sister, not to see her father, and not to see her childhood home. She keeps herself cocooned in New York, unable to face the event that made her want to leave Walton, Georgia in the first place. When Cassie gets the dreaded phone call- her father is dying and has requested her presence at his bedside- she decides to return home one last time.

When she arrives back in Walton, not much has changed and she is reassured that her decision to leave was for the best. If it wasn't for the fact that she has grown to adore the nieces and nephew that she has never met, as well as the fact that her father has left her the house in its entirety, she would have been on the first plane back to New York. The longer that she stays, the more of her past becomes resolved, but will Cassie start to see things clearly for the first time in a long time, or will her past drive her away again?

Falling Home was originally Karen White's third novel, but when the rights were returned to her (after the book went out of print), she and her current publisher decided to republish it. They gave it a new cover (see right for the original one- I definitely like the redesigned cover better), and Karen White gave it a rewrite. She didn't change the story, but made it tighter and added two new points of view. This gives those who didn't get a chance to read it the first time around a second opportunity to do so.

I've only had the chance at this point to read one other novel by Karen White (On Folly Beach), but I thoroughly enjoyed this one as well. Her signature writing style shone through, and just when I thought that I had it all figured out, she'd throw a twist in there and I'd have to figure it out all over again. Even though I figured out most of the surprises before the characters did, I still enjoyed trying to figure everything out as I read.

The characters in Falling Home are exceptionally well-developed. Cassie, stubborn and afraid to face her past, was a character that you wanted to hug and slap upside the head simultaneously. My favourite character was Maddie, Cassie's niece. My heart ached for her. Being a teenager is never easy, and Maddie has added burdens placed on her that make it even more difficult. Adding some Southern humour into the mix was Sam, another character that you want to invite home to dinner. His scenes with Andrew were especially hilarious.

If you enjoy Southern fiction, or stories about sisters and the unique bond that they share, you'll love Falling Home. Please come back tomorrow when Karen White will be guest posting and I will be giving you a chance to win a copy of this endearing novel.

Rating: 4 stars out of 5
Recommended to: Fans of Southern fiction, stories about sisters
Challenges: 2010 100+ Reading Challenge

Thank-you to Joan Schulhafer Publishing and Media Consulting for sending this review copy.
Posted by The Book Chick at 8:56 AM