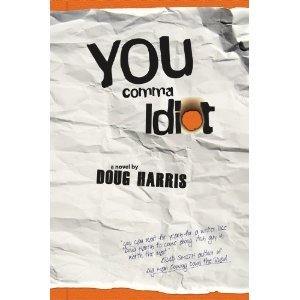 Lee Goodstone is the perennial screw-up that everyone knows at least one of. He's a low-level hash dealer living in Montreal, his friends are all, for the most part, burnouts like him, and he's sleeping with his best friend's girlfriend. Other than his drug deals he's unemployed, living in an apartment rent-free because he does the custodial work, but everything is about to change for Lee. One of his oldest friends, Henry, becomes an overnight public figure when he is accused of kidnapping a teenage girl that none of his friends had even heard of before. He is determined to remain silent about his potential role in her kidnapping, and refuses to reveal anything that he knows. Lee finds himself a part of the media frenzy when he makes an offhand remark to a reporter who is following the case, and suddenly nothing for Lee will ever be the same.

YOU comma Idiot is unlike anything that I've ever read. For one thing it's told entirely in second person, a unique choice that certainly pays off. Although it did take me a few pages to get used to Lee being referred to as "you", it wasn't long before I had completely adjusted. For another thing, Lee is a character that you don't know if you're rooting for or not. From the outside, he's a complete loser. At the age of 28 he is more interested in getting high or drunk than anything else. He hangs out with his buddies with a regularity that is more fitting for a teenager, and he has absolutely no qualms when his best friend's girlfriend jumps into bed with him. He just goes with it, essentially abandoning the guy who took him in as a teenager for a piece of tail. I spent most of the book not really liking him, yet being utterly fascinated with the trainwreck that was his life.

Lee is not without his redeeming qualities. He has a great affection for Ack! (Zachary), the child of one of his female friends. He refuses to sell out his friend Henry to the media even when he, and all of his friends, are convinced that Henry did kidnap this teenage girl. He's a character that I didn't necessarily love, but I was unable to write him off completely.

YOU comma Idiot is not a book that you skim through. It's one that you'll want to take your time reading, especially because it is so rare to read a book written in the second person. The cover art deserves a special mention as well, because it is unique on a level on par with the uniqueness of the writing. When you open the book, the inside of the front and back covers is covered in what looks like ink drawings and sayings, much like the inside of a teenager's binder would look like. I spent a lot of time examining the quirky drawings.

Completely different from anything that I've ever read before, YOU comma Idiot is a treasure not to be missed. Doug Harris takes a lot of risks with his writing and his characters, but it pays off in the end, resulting in a strangely satisfying read.

Thank-you to Goose Lane Editions for sending me a copy of this book in exchange for my honest review.
Posted by The Book Chick at 5:00 AM