Review: "Still The One" by Robin Wells 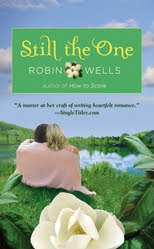 Katie Charmaine is still mourning the loss of her husband, who was killed in Iraq, when her past comes back to haunt her. Zach Ferguson, a one-time summer love, returns to her town with their 16-year-old daughter, Gracie, in tow. Katie is shocked. She gave Gracie up for adoption when she was born, and Zach didn't even know about her existance. Zach explains that Gracie sought him out after her adoptive parents were killed in a car accident, and now Gracie needs both of their help. She's pregnant and hurting, and could use a woman's touch.

While Zach and Katie struggle to learn the difficult business of co-parenting, Gracie struggles to accept these two people as more than just a ticket to a better life for her and her baby. She's filled with resentment over the fact that Katie gave her up as a baby. Katie herself is unprepared for the rush of emotion that she feels towards Zach, emotions that she thought were buried a long time ago, as well as what it's like to have her daughter back in her life.

Still The One was just okay for me. I found that the multitude of problems that surround Katie, Zach, and Gracie are overwhelming. I could have handled most of it (unplanned pregnancy, adoption, the child returning pregnant herself) but the fact that Katie had a rough childhood, Zach had a rough childhood, Katie's husband had died, and Gracie's parents had died was just too much for me. While dealing with the issues of adoption, abuse, alcholism, teenage pregnancy, and more, it became too much for me, and it became unbelievable. It's as if every trick in the book was pulled out to make this one a tearjerker but it worked the opposite way for me. I finished it, but didn't find it particularly satisfying.

That being said, I did come to like the characters in the book. They were well-developed and it was easy to be sympathetic towards them as they worked towards a common goal. The developing romance between Katie and Zach was enjoyable and believable as well, and the conclusion was satisfying.

I wouldn't go out of my way to recommend this one, but it would be worth picking up if you're looking for characters that you can't help but like despite the troubles that life is continually throwing their way.

Thank-you to the Hachette Book Group, who sent this in exchange for my honest opinion.
Posted by The Book Chick at 5:38 AM