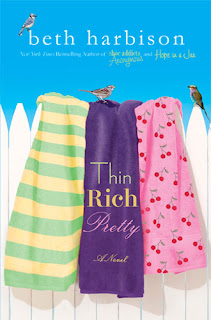 20 years ago Holly, Nicola, and Lexi shared a cabin at summer camp. Holly was overweight and endured teasing about her extra pounds, Nicola was thin but had a rather large nose, and Lexi was the snooty (but secretly hurting) leader of the mean girls. Fast forward to present day- the girls are now in their 30's, Holly runs an art gallery (but still has the extra pounds), Nicola is an actress (but hates her nose), and Lexi has just found out that her rich father, who recently passed away, left her nothing in his will.

When Holly accidentally runs into Lexi, things take a strange turn and the women will all find out something about themselves in the process of making amends for their past.

Thin, Rich, and Pretty was okay. It wasn't great, it wasn't horrible, it was just okay. Here was my major problem with it: the book isn't a long one (which is fine), but it felt to me that three quarters of the book was spent introducing the three main characters and their individual situations. Once we were all up to speed (which included some flashbacks to their camp days), it felt like the author was in a hurry to conclude the book and wrap it into a neat little package. It felt rushed to me- I actually felt a little cheated. It feels like we just get to "know" the women, and then it's all over. The girls apparently "grew" in there, but it felt forced.

Potentially this could have been a great book. The characters were all likable (even the "evil" Lexi), the plot a bit cliched but workable, and the conclusion heartwarming. It's too bad that the middle was rushed. It lost something for me. Fans of Shoe Addicts Anonymous or Hope in a Jar may want to give this one a try, just don't expect much more than a light, quick read.

Rating: 2.5 out of 5
Recommended to: Fans of Beth Harbison's previous novels
Challenges: 2010 100+ Reading Challenge, 2010 Chick Lit Challenge, 2010 Support Your Local Library Challenge
Posted by The Book Chick at 5:00 AM