Review: "Every Last One" by Anna Quindlen 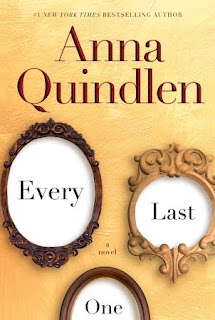 Mary Beth Latham has everything that she could have hoped for. She loves her husband, Glen, even though their marriage has changed over the years into something resembling a partnership rather than passion. She has three beautiful children. Ruby is an independant teenager with a passion for writing. Fraternal twins Alex and Max couldn't be more different- Alex is athletic and popular, Max introverted and withdrawn. Their family isn't without their share of problems, though, and Mary Beth knows it. Ruby had a stint with anorexia in her earlier teen years but seems to be recovering. Max isn't having the easiest time with his entry into high school and seems to be spiraling into depression. Despite the problems, all of the family is well and accounted for, and that's seems to be all that anyone can ever ask for when counting their blessings.

Mary Beth's world is rocked when a horrific tradgedy befalls her family. Suddenly she is left to pick up the pieces of what was formerly known as her life, and she knows that nothing will ever be the same in the world in which she lives.

Every Last One is a beautiful book, despite the tragic subject matter. Anna Quindlen spends the first half of the book describing Mary Beth's everyday life- her work, her husband, her life as the mother to three angsty teenagers. The portrait that she creates is one of normalcy, one of everyday struggles underlined with the hope that someday things will level out and she'll be watching her grown children make their own way in the world. I appreciated the seemingly mundane details in the book- the feel of the kitchen floor under Mary Beth's feet in the morning. The smell of her son's hair. The pleasure that Mary Beth takes from the fleeting smiles on her son Max's face. The journey to drop the kids off at camp, and the feeling of freedom that follows.

The second half of the book details what happens after a tragedy befalls their family. It describes Mary Beth and her grief, the moment that she realizes that nothing will ever be the same. Details of the tragedy remain vague at first, but are slowly revealed to the reader after time.

Despite the dark subject matter contained within its pages, Every Last One is a breathtaking book. Quindlen describes all of the characters, their personality quirks and the mannerisms, so well that I felt as if I was standing outside of their home looking in. I connected with Mary Beth, as a mother myself I could understand her concerns and frustrations with her children. I even connected with her teenage children, my own angsty teenage years not being so long ago. These connections with the characters made the tragedy seem all the more real when it happened, and the aftermath that much more sad.

Underneath all of the pain and sorrow that Mary Beth felt after the event that changed her life, there remained a thread of hope; hope that life would continue, hope that one day it wouldn't hurt quite as much. As sad as the book is, it remains possible that joy is waiting for Mary Beth on the other side.

If you're looking for a book that's cheerful and light, this isn't the one that I would pick. If you're looking for a book that will make you appreciate your family in a whole new way, I highly recommend picking this one up. Quindlen's descriptive writing style is the icing on the cake here, it's truly a pleasure to read her carefully chosen words.

Rating: 4 stars out of 5
Recommended to: Fans of fiction who are looking for an in-depth read
Challenges: 2010 100+ Reading Challenge, New Author Challenge 2010, 2010 Support Your Local Library Challenge

I borrowed a copy of this book from my local library.
Posted by The Book Chick at 9:54 AM