Q&A With Heather Wardell, Author of "Seven Exes Are Eight Too Many" 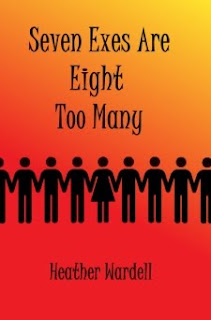 I love Canadian authors, and I love women's fiction, so it should come as no surprise that I love Canadian author Heather Wardell's books! After reading (and loving) Seven Exes Are Eight Too Many (my review) I asked Heather if she would be interested in doing a Q&A for The Book Chick and she kindly agreed! So please join me in welcoming her!

What was your inspiration for Seven Exes Are Eight Too Many?
Back in 2007 I saw a TV ad for "The Bachelorette" or a similar show (the details are lost in the mists of my mind at this point!). I distinctly remember thinking, "How much worse would something like that be if you were there with all your exes?" I thought it could make a great book but was concerned that I wouldn't be able to handle writing about so many characters at once. The idea wouldn't let me go, though, and eventually I figured I should give it a try.

Was there any special research that you did about reality television and what really goes on behind the scenes?
I researched online, and read a book about the behind-the-scenes world of the first season of "Survivor". I didn't want to duplicate an existing show, though, so I made the decision early on to avoid researching too much. Instead, I put that time into planning out my show and making it real enough that it could actually be filmed.

You chose to self-publish. What made you decide to go that route?
Many aspiring authors keep their books to themselves until one sells to a big publishing house. I had intended to do that as well, but then made my first book, "Life, Love, and a Polar Bear Tattoo" available for free download from my website after I'd exhausted my list of potential literary agents. I released it, honestly, primarily to stop myself from fiddling with it instead of working on other books, but it quickly became popular and has had nearly four thousand downloads in the 18 months it's been online. When I saw that interest, I decided to release my "Go Small or Go Home" and then "Seven Exes Are Eight Too Many" as well. At this point, I am still interested in the big publishing deal but I am absolutely loving getting reader emails and having people enjoy reading my work. That's truly why I'm writing, after all!

Are you working on a new book? If yes, what's it about?
Always! I like to keep several things in the pipeline at once.

In November or December of this year, I will be releasing my fourth book, "Planning to Live", about a woman whose car slides off a deserted icy road, leaving her trapped and bleeding, and how between escape attempts she comes to realize she's focused her life on everything except what really matters. It's darker than anything I've written before, but I think it still "sounds like me", and I hope my readers will love it as much as I do. An excerpt is available on my website. 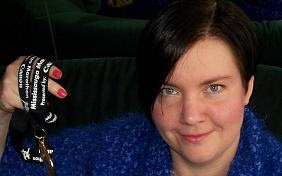 I've just finished the second draft of my new, currently untitled, book, which features the return of some of my favorite past characters and stars a divorced woman with a life-long dream of being a chef and a history of letting others (especially the men in her life) push her around who finds herself trying to choose between the career she's finally achieved and her boss, with whom she's developed a strong relationship. There is a preliminary excerpt on my website. I will be sending this book to literary agents later this year or early in 2011, and if it's not picked up by one of them I will definitely release it myself.

And in a few weeks I have a big decision to make: go ahead with what I've planned as my next book, the story of twenty-eight-year-old Andrea who tries to recreate her life, after her boyfriend of fourteen years dumps her, by doing the opposite of everything she usually does, or write a sequel to "Seven Exes Are Eight Too Many", probably with Summer as the main character. Either will be lots of fun, I'm sure!

What's your opinion on the future of women's fiction? Will interest increase or decline?
I think there will always be interest in stories about real women and real lives. Paranormal books are very hot right now but I can't be the only one who's never really gotten into those sorts of worlds. I much prefer books to which I can relate and characters who seem like me, and I think women's fiction is the place to find those books.

"Seven" takes a few reality television shows and combines them to make something completely new. What is your favourite reality show?
Will you hate me if I admit I hardly watch them any more? I loved the early seasons of "Survivor", especially the first season, but these days the "reality" part is long gone. Shows seem to be cast according to a formula and the people involved seem more and more just in it for the attention. That said, I do watch "So you think you can dance?" because the talent displayed is just phenomenal.

What do you like to do in your free time?
I am an avid crocheter, and I also run half-marathons. (I did one full marathon, which proved to be more than enough for me!) Until very recently I played clarinet in a local concert band, but I've been taking drum lessons and have just had my first concert as a percussionist.

What is your favourite book format (paperback, hardback, eBook, etc.)?
I'd have to say eBook! I love having my books everywhere I am. The downside is being unable to lend books to other people, but I'm sure the industry will eventually find a solution to that.

What book are you recommending to everyone right now?
I have two. "The Art of Racing in the Rain" by Garth Stein is an amazing book, narrated by a dog. Yes, a dog. But so brilliantly done. I'd also like to recommend my writing friend's book. Danielle Younge-Ullman's "Falling Under" is so much darker than my books but it's beautiful and touching and gloriously written.

What books are on your nighstand/e-reader?
According to Goodreads (http://www.goodreads.com/heatherwardell if you'd like to friend me), I have forty books in my to-be-read list. It should be a bit higher because I have a few as yet untracked. I'm so lucky my iPhone doesn't get heavier with more books in it! On my nightstand, though, in paper, is "The War of Art" by Steven Pressfield. I've read it several times and now re-read bits of it from time to time when I need inspiration to keep working.

Thank-you to Heather for stopping by! Heather's book Life, Love and a Polar Bear Tattoo is always a free download for eReaders. Her second and third books, Go Small or Go Home and Seven Exes Are Eight Too Many are available for only $0.99 each. Seven is also available in paperback from Amazon.
Posted by The Book Chick at 6:59 AM