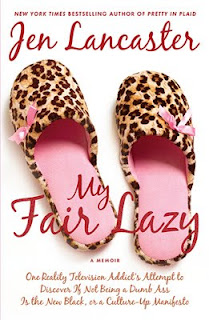 Jen Lancaster, where have you been all my life? She is one Funny woman- funny with a capital F!

My Fair Lazy chronicles Jen Lancaster's attempts to incorporate more culture into her life. When she was laid off, she started spending more time in front of the TV and as a result became hooked on reality television. Suddenly her conversations revolved around who was kicked off Survivor, and who that hottie from American Idol was. Even after Jen finds work again, as an author (duh!), her reality television addiction remains. When Jen realizes that she's having a hard time conversing in public about anything that is not related to television, she decides to expose herself to more: more culture, more music, more plays, more food. Her journey towards culture is told in My Fair Lazy.

I've heard of Jen Lancaster, of course, but I've never had a chance to read any of her books. Now I'm wondering what took me so long. She is really, really funny. As in, laughing- out- loud- while- people- are- looking- at- you- strangely- funny. I started reading this book on the beach while my kids played, and the next thing I knew I was halfway through! I had a really hard time putting it down. Her writing is more than just funny- it is engaging and insightful as well. She entered into this project with an open mind, and I found myself cheering for her when she really enjoyed a play that she was initially doubtful about. I was happy that she tried many different foods, even when she didn't enjoy all of them. I especially loved that she found herself reading classic literature. I tried that myself not that long ago, and even though I didn't really enjoy the book that I read, at least I made an attempt to open myself up culturally!

Her novel culminates when she attends a big author event and finds herself able to carry on intelligent and insightful conversations, with a little reality television thrown in for good measure. Jen never knocks reality television completely, which I loved, but rather finds a way to expand her personal and conversational horizons. She also never tries to disguise the fact that she's a writer, and throws interesting tidbits about her writing schedule in there for good measure. Have you ever realized that so many people who write memoirs don't write about the writing process at all, even when it's relevant? I found this refreshing.

I enjoy memoirs, and I enjoy laugh-out-loud humor, so there was no reason for me not to love Jen Lancaster and My Fair Lazy. I'm planning to read more of her books, and am especially drawn to Bright Lights, Big Ass and Such a Pretty Fat. If they're all as funny as this one (and I've heard that they are), then I'm in for a treat!

I received a copy of this book from Penguin Canada in exchange for my honest review.
Posted by The Book Chick at 8:16 AM