Review: "The Bright Side of Disaster" by Katherine Center 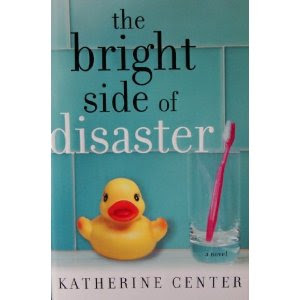 Jenny Harris is days away from giving birth to her first child when her fiance leaves to get cigarettes and doesn't come back. The next day she finds a note in the kitchen and discovers that she'll be facing motherhood alone. After spending the day ranting and raving and crying she goes into labour, and that night her daughter, Maxie, is born.

Suddenly Jenny is plunged into the world of sleep deprivation, sore boobs, spit up on her shirt and explosive baby bowel movements. Thank goodness she has her mother to help her, not to mention the friendship of her handsome new neighbor, Gardner, who has an amazing way with crying babies. Jenny navigates this strange new world with bravery, and she may even be falling in love, when her ex, Dean, makes a surprise appearance on her doorstep. She's left to make a decision: does she remain in her unhappy yet familiar relationship, or does she take the frightening steps towards true happiness?

I recently read Katherine Center's most recent release, Get Lucky, and enjoyed it so much that I decided to go back and read her debut book. Center has once again created a character that I was rooting for from the beginning. Jenny has been stuck in a relationship with a selfish man-child for so long that she doesn't realize the damage that he's doing to her self-esteem. She's just so happy to be headed towards the things that she wants in her adult life- marriage and children- that she's willing to settle for a man who is less than what she deserves. When Dean leaves her it's the best thing that could have happened- suddenly she's doing things alone, and hopefully she'll learn that she doesn't need him (or any man) to be truly happy. This new and improved Jenny shines through in the last part of the book, and I was happy for her personal revelations.

The Bright Side of Disaster doesn't glamorize new motherhood either. I always think that it's funny when books portray new motherhood as something easy and effortless. For some this may be the case, but for most of us new motherhood is filled with exhaustion, sleepless nights, babies who just won't stop crying and explosive diapers. That's not to say that there isn't extreme joy when it comes to having infants, but that there is a big learning curve.

I did have one small critism of the book, but it's minor. After Dean leaves, Dean's parents decide to support Jenny financially so that she doesn't have to work. After Dean's parents decide to stop supporting Jenny and the baby, her father steps in and hands her a large cheque. These gestures filled in the plot holes of how Jenny could afford to stay at home with the baby without having a job, but they weren't realistic. I was a single mom and I can assure you that nobody stepped in and handed me large amounts of money when my boyfriend at the time decided that he wasn't ready to be a father.

Overall, The Bright Side of Disaster was a fun book, filled with the realities of motherhood and laugh-out-loud moments. Jenny's journey towards discovering her own self-worth was a pleasure to read. If you haven't had the chance to read this one, it would make a great addition to your beach bag!

I borrowed this book from the Norfolk County Public Library.
Posted by The Book Chick at 8:42 AM