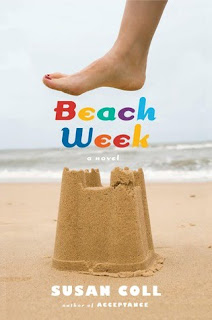 Jordan Adler has had a rough go of things since her family moved to the D.C. suburbs. Not only was she forced to make new friends and new connections in the middle of her formative high school years, but she was injured by a wayward soccer player and had to endure a year of migraines and MRI's. Her parents haven't had the best time of it, either. Charles Adler had moved to D.C. in order to run a project to revitalize the downtown area. The project has encountered opposition, though, and until it is completed he doesn't receive the sizable bonus that he's been promised. The medical bills resulting from Jordan's injury continue to pile up, and Leah Adler, his wife, hasn't been able to find work. Leah, meanwhile, finds that she doesn't quite fit in in her new hometown. The other mothers have made an effort to exclude her, all she and her husband seem to do is fight, and her daughter is growing more distant.

Insert beach week into the mix, and they have a disaster on their hands. Beach week is a right of passage in D.C., where a group of girls go away to the beach on their own to celebrate their impending adulthood. Jordan doesn't really want to go, especially since she's met a handsome college man named Khalid, but her parents are insistent that she attend. The parents of the girls who are going get together to assess what their liability will be if things end up going horribly wrong, but beach week doesn't turn out at all like anyone thought that it would.

Beach Week is filled with sharp wit and dry humour, and it addresses something that every parent fears: when their child reaches that terrifying time of being not quite a teenager, but not quite an adult. The funny thing about the book is that I didn't particularly love any of the characters, which is usually a benchmark for me of how much I will enjoy the book, yet I appreciated the story and enjoyed it. The parents of all of the girls were the kind of people that you just love to hate- judgmental and cliquey, yet they were really no better than any other parent around them. Despite the fact that Charles (Jordan's father) was not a character that I particularly loved, I did appreciate the fact that he is portrayed as being flawed and quite human, even though he tries to keep it all together for the sake of his wife and daughter. You get the sense that he is quite overwhelmed by both of them.

Beach Week is a must-read for any parent of a teenager. Susan Coll examines the relationship between teenagers and their parents with humour and sensitivity, making this book one not to miss, even if you do want to slap some of the spoiled teenagers and their indulgent parents along the way.