Review: "So Much for That" by Lionel Shriver 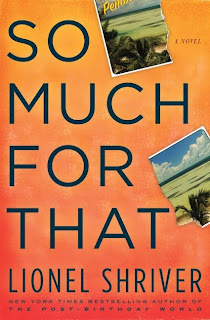 Shep Knacker, after building his handyman business his entire life, is finally rewarded when he sells it for a cool $1 million dollars. He's been saving for "The Afterlife", the journey he plans to take to Tanzania, the one with no return date. His wife, Glynnis, is less than sold on the idea of leaving America to live out their remaining days in a foreign country and has been clinging to their current life. Shep reluctantly returns to his old job, although this time he's an employee rather than the boss.

Shep finally concludes that there is no time like the present to start his retirement and tells Glynnis that he will be moving to Tanzania, with or without her. Glynnis drops a bomb of her own- she has cancer, and will require his health insurance in order to pay for her upcoming treatments. Shep returns to work as if nothing happened, but as his retirement nest egg shrinks significantly as a result of the out-of-pocket expenses he pays for Glynnis' treatments, his plans of escape seem further away than ever.

So Much for That is a commentary on what it's like to be a middle-class American, the nice guy, and a victim of the misleading and complicated health care system. It was kind of like the book version of Michael Moore's Sicko, only  fictional. It amazed me what the Knacker family had to go through in order to receive treatment for Glynnis' cancer, and they even had insurance! It seemed that every day Shep was on the phone with yet another branch of his insurance company, disputing yet another denied claim, and it certainly made me thankful for the Canadian health care system.

So Much for That is more than just a social commentary, and it became, for me, one of those books that I initially didn't expect to love, but ended up exceeding my expectations in every way. In fact, this book stayed with me long after I read the final chapter, and has a place of honour on my bookshelf. The characters, Shep, Glynnis, and friends Jackson, Carol, and Flicka, are vividly developed and quickly become people that I cared about. Even the distant Glynnis, at first holding a high opinion of herself as a gifted artist, despite the fact that she rarely takes the time to actually work on her art, grew on me as her story progressed. In fact, one of my favourite quotes in the book comes from the mouth of Glynnis. While ill she contemplates her lasting contributions to the world in general and says,

"She had cleaned things that only got dirty again. No one had ever put on a gravestone "Here Lies, etc., She Swiffered the Kitchen Floor."" (page 310 of the hardcover edition)

Lionel Shriver has written a story that was begging to be written. The ending had me both laughing and crying (as in actual tears being shed), and the rawness of the book shocked me at times (warning: this one is not for the faint of heart, as there are some rather graphic scenes). It's one of those books that will make you think, make you laugh, and it may even make you cry. Thank-you to HarperCollins Canada for this review copy! Take a moment to browse inside the book here, or find out more about the author here.

Rating: 5 stars out of 5
Recommended to: Fiction fans, those who have enjoyed Shriver's previous books
Challenges: 2010 100+ Reading Challenge
Posted by The Book Chick at 6:42 AM