Review & Giveaway: "The Opposite of Me" by Sarah Pekkanen 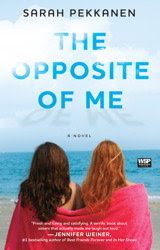 Lindsey Rose feels like she's finally going to get out of her gorgeous fraternal twin sister, Alex's, shadow: after many long hours spent working at an advertising agency, she is in line for the vice presidency. She'll be the youngest vice president that her company has ever had, and she will have everything that she's ever wanted in life. One devastating night takes it all out of her grasp, and she heads home to Maryland with her tail between her legs.

As if living with her parents and being unemployed isn't bad enough, Lindsey is forced to become involved with Alex's wedding plans to Prince Charming. Watching her sister, who has always had everything handed to her on a silver platter, preparing to walk down the aisle nearly breaks her resolve to re-invent herself. However, when an old family secret is revealed, and when Alex faces some unexpected challenges, Lindsey and Alex discover that things are not always what they seem to be and they both come to see themselves and their role in their family in an entirely new way.

I love The Opposite of Me's gorgeous cover. I mean, I'm not one to generally judge a book by its cover and all that, but it certainly helps when the cover is as appealing as this one! The picture on the cover is of the back of the heads of two women, one a brunette and one a redhead, and when we learn that Lindsey is a brunette and Alex is a redhead, it made sense. I love that it doesn't show their faces, I like being able to imagine that for myself.

Beyond the obvious cover appeal, the story itself flows effortlessly. This is at first glance a larger book (400 pages), but the story is so enticing that I couldn't put it down. I didn't find the dialogue awkward like I have in some debut books- awkward writing is one of my biggest pet peeves and usually detracts from my overall enjoyment of any book. Instead, I found a carefully plotted story with words that flowed, and it easily held my attention.

The characters in this book were especially well-developed. The emphasis is on Lindsey, and the story is from her point of view, but we do get strong glimpses into Alex's mindset. Lindsey and Alex's parents were hilarious, and they provided comic relief at the more serious parts, which helped the book to maintain its overall lighthearted tone.

The ending was predictable, but that made it no less satisfying for me. In fact, one of the things that makes me sigh wistfully at the end of the book is how good the ending was. After I was done reading The Opposite of Me, you can rest assured that there was lots of wistful sighing.

Sarah Pekkanen has written a strong debut novel, and I'm thrilled that this will not be the last we hear from her (she's already submitted the manuscript for her next book). The Opposite of Me is a compelling look at the complicated bond between sisters.

You can browse inside this book here, or purchase it here. This book would also make a great book club choice, and the book club guide can be found here.

Thanks to Crystal at BookSparks PR I have one copy of The Opposite of Me by Sarah Pekkanen to give away! To enter:

1. Leave me a comment and tell me if you have a sister, and if so, do you two have a complicated or an easy relationship. (Note: I personally do not have a sister, but am blessed that I now have 5 wonderful sister-in-laws!!!) Please leave me an e-mail address so that I can contact you if you are the winner. No e-mail= no entry!

3. *Bonus Entry* Spread the word about this contest! How you do it is up to you: Facebook it, blog about it, post it on your sidebar, just leave me a comment letting me know how you spread the word.

This contest is open to both US and Canadian residents, no PO Boxes please! It runs until July 12, 2010 at midnight EST, and the winner will be contacted by e-mail. Good luck!
Posted by The Book Chick at 8:46 AM