Review: "My Name is Memory" by Ann Brashares 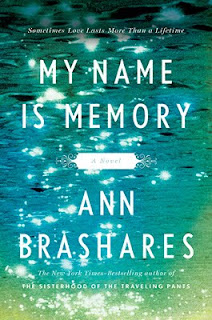 Daniel has "the memory", the ability to remember sizable portions of his past lives as well as the ability to recognize souls that he has met in previous lives. "The memory" is very rare, only one child born among thousands will have it, and having it can be both a blessing and a curse. Daniel can remember 552 Asia Minor, 1918 England, and 1972 Virginia, but what he remembers most clearly is her. He knows her best as Sophia, although in present day she has the name of Lucy, but she is the only one who he has ever truly fallen in love with. Their first encounter, in Asia Minor, was fateful, and Daniel spends much of his lives searching for her so that they can be reunited once again and so that he can atone for his past sins.

Lucy is in high school when she encounters the moody loner Daniel. For reasons that she can barely understand, she develops a full-on crush. Daniel appears not to notice her, but on the very last day of high school they have a strange interaction where Daniel calls her "Sophia" and asks if she remembers him. Lucy runs away from him and continues on with her life, but after an encounter with a psychic, she becomes determined to find him again. The only problem is that nobody knows where Daniel is now, or knows how to find him.

Suddenly desperate to find one another, Daniel and Lucy embark on a dangerous path, and they must overcome virtually insurmountable obstacles if they want to be together.

I have to confess something: I have never read a book by Ann Brashares. I've never read her wildly popular YA series The Sisterhood of the Travelling Pants, nor have I read her adult novel The Last Summer (of You and Me). Something about My Name is Memory attracted me to it right away; perhaps it was the story of everlasting love. I'm so glad that I read this book! It was amazing, and the touch of the mystical enchanted me. I love the idea that true love can last for more than a lifetime, that it can be essentially everlasting and can last over many lifetimes.

There were so many new and interesting concepts that were introduced to me in this book concerning past lives. I'm not sure how many of them are based on existing ideas and how many are a product of the author's imagination, but they really stuck with me. The one that was the most thought-provoking for me was the concept that dreams are often made up of memories from past lives. I've had some strange dreams before, ones that made complete sense except for the fact that they took place in a setting that I have never been in before (one dream is set at a cottage where I have never been, another at a playground that I can't remember ever having visited), which is why this idea stuck with me so strongly. There were other interesting concepts in this book as well, such as young children remembering pieces of their past lives in their early years, but forgetting those pieces as they grow. And, of course, of love lasting for more than one lifetime. My Name is Memory offered me a different perspective on life as we know it, and it certainly gave me a lot to think about.

The characters in this book were so well developed, and I especially loved the character of Daniel. He was brooding and mysterious, but gentle and loyal at the same time. We get to know Daniel the best because the story alternates between the present day with Daniel and Lucy, and Daniel's past lives where we are given a glimpse into the different things that Daniel has experienced, as well as the different times that Daniel and Lucy have encountered one another. The switch between the past and the present day were both effortless and intricately researched, and as Daniel describes his previous lives I felt as I was there with him.

The only problem that I had with the book was the ending, because there were so many questions left unanswered. I am hoping that these questions only remain unanswered in this book because there will be a sequel to My Name is Memory. I'm definitely not done with reading the story of Lucy and Daniel and I certainly hope that I will have a sequel to look forward to about love that transcends all else (Edited to add: I am so excited to find out that this will actually be part of a trilogy!).

Ann Brashares has kindly answered a few questions for me about her writing and about this book.

The Book Chick: Your first novels were aimed at a young adult audience, and now you have switched to writing for an adult audience. Did you find the switch was something that came naturally for you?

Ann Brashares: It was more of a natural progression than a leap. In the Sisterhood novels, the characters were nearly twenty by the end of the fourth book. In The Last Summer and My Name is Memory, the principal characters are in their early twenties. I don't think there's necessarily a hard distinction between adult and young adult books. I guess I really love to write about the stretch of life that straddles the two.

TBC: What was your inspiration for My Name is Memory?
AB: This scene popped into my head of a young man and a young woman facing some hideously dire situation and the man telling the woman, no matter what happens to them, even if they die, he will find her again. I started to pull the scene apart--how does the man know this? What special power does he have over death? And then I started to think about memory. Maybe the only real power he has is an extraordinary memory. What would a person be like who could remember back a thousand years?

TBC: Do you have any advice for aspiring or debut authors?
AB: Set yourself a goal for a particular piece of work, whether it is a story or a novel, give yourself a deadline and make sure you finish it. Make sure you have one fully formed piece of work under your belt as you set forth.

Thank-you to Penguin Canada for sending this review copy!
Rating: 5 stars out of 5
Recommended to: Fans of Brashares' previous books, as well as fans of fiction and strong love stories
Challenges: 2010 100+ Reading Challenge, New Author Challenge 2010
Posted by The Book Chick at 7:27 AM