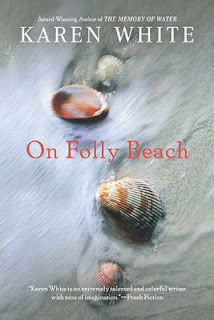 Emmy Hamilton has just lost the love of her life, Ben, to the war in Afghanistan and is numb to the world. She continues to work at her mother's bookstore, Paige's Pages, in Indiana but she has no desire to move on in a world without Ben. When her mother buys a box of old books from Folly's Finds, a bookstore in Folly Beach, South Carolina, that contains cyptic love notes in some of the book's margins, Emmy is just intrigued enough to move out to Folly Beach and purchase the old bookstore herself, if for no other reason than to solve this old mystery.

When Emmy moves out to Folly Beach she meets Abigail Reynolds and her family. Abigail inherited Folly's Finds from her mother-in-law, Maggie, and may hold some of the keys to this mystery from the past. As Emmy takes over ownership of Folly's Finds she also meets LuLu, Abigail's prickly aunt and Maggie's sister, who makes bottle trees and sells them out of the bookstore's backyard. LuLu becomes uncomfortable and elusive as Emmy continues to uncover more notes in Maggie's old books, and Emmy is even more convinced that there is a mystery to solve.

As Emmy adapts to her new life in Folly Beach and she begins to open herself more to those around her, she must decide if she's willing to let go of her own past and embrace her future.

Despite her backlist of bestsellers, On Folly Beach is the first book I've read by Karen White and I was enchanted from the beginning. White tells two stories in her latest book- the story of Emmy, newly widowded and grieving, and the story of Maggie in 1942, in love with a man who is hiding multiple secrets from her. These parallel narratives, told in alternating chapters, kept me hooked throughout and I couldn't even decide which story I liked better. White also incorporates a mystery into her story, and she reveals the key pieces tantalizingly slowly, so that I was rushing to get to the end to figure it all out.

On Folly Beach did not disappoint; the setting was a beautiful barrier island with a rich history, the characters multi-layered, and the conclusion surprising yet satisfying. Emmy was my favourite character- she was vulnerable and grieving the loss of her husband yet she posessed a fierce determination to uncover the truth that she found in the old books in her bookstore. LuLu was also a great character despite her prickly exterior. Throughout the book she demonstrates that underneath it all she possesses great wisdom and compassion.

Karen White fans will love her latest novel, and those who have not previously read her books (like myself!)will enjoy her skilled writing and addictive storylines. Thank-you to Joy at Joan Schulhafer Publishing & Media Consulting for this review copy, and be sure to check back tomorrow as Karen White guest posts and I will have two copies of On Folly Beach to give away!

Rating: 4.5 stars out of 5
Recommended to: Fans of romance and light mystery, those who loved Karen White's previous novels
Challenges: 2010 100+ Reading Challenge, New Author Challenge 2010
Posted by The Book Chick at 5:00 AM