Review: "Either You're In or You're In The Way" by Logan and Noah Miller 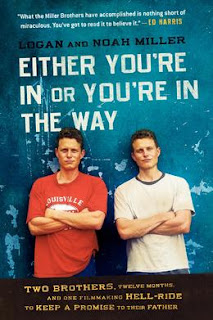 Logan and Noah Miller are twins on a mission: despite the fact that they have no filmmaking experience, they are determined to direct and act in a movie that they wrote as a tribute to their late father. Their father died in a jail cell after an extended stint of homelessness, and this is how they want to honour his memory. The problem is that they have no equipment, no money, no major stars, and (did I mention this already?) no experience.

What follows is the equivalent of a filmmaking roller-coaster ride, filled with gratifying highs and beyond depressing lows. The brothers manage to secure the Panavision New Filmmaker Grant, which has helped films such as Napolean Dynamite become a reality. They corner Ed Harris at a film festival and somehow manage to get him to agree to read their script. They get Ed Harris on board, they lose Ed Harris, they get him back again. They have no money, but then they find some. As first time directors they must tread carefully so that their crew respects them. They hire. They fire. But ultimately, they get the movie made, and Either You're In or You're In The Way is their story.

My first impression of the book? What a ride! My second impression of the book? These guys must have horseshoes hidden somewhere on their person. Despite the fact that Logan and Noah Miller have no experience in the filmmaking industry and no contacts in Hollywood, they manage to overcome all of the obstacles in their way and eventually do what they set out to do: make their movie, tell their story. I mean, how many people would even consider cornering Academy Award nominated actor Ed Harris, having never met him before, and somehow convince him to star in their movie, and then actually do it? Not many. The fact that their journey is true makes the book all the more readable; these guys just refused to quit.

Either You're In or You're In The Way is an uplifting story, and it won't just appeal to movie buffs. Despite the fact that the story of how a low-budget movie gets made is fascinating, the principles of the story can be applied to other professions as well. The book is about more than just how a movie gets made, it's about refusing to give up when the going gets tough, and about following your dreams even when they seem impossible. I can't wait to watch Touching Home for myself- after reading what these guys have been through there is no way that I'll miss out on the chance to see the end product.

Thank-you to Logan and Noah Miller for sending me this review copy! You can find out more about Touching Home and where it is playing here, or you can read the brother's blog here.