Review: "A Gift From Brittany" by Marjorie Price 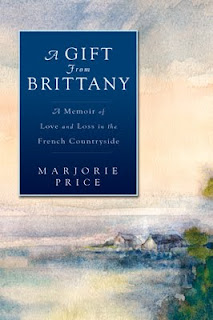 It's the 1960's, and Marjorie Price does something incredibly daring for her time. She decides to leave her home with her family in Chicago to pursue her passion- art- in Paris, France. While she's there, studying art and seeing the sights, she meets and falls in love with Yves, a French painter. The two quickly marry and soon give birth to their daughter, Danielle. Marjorie and Yves begin looking for a home on the French seaside, somewhere small and quiet where they can escape from Paris for the summers and paint, but instead they end up owning half of a hamlet in the Breton countryside, in the little town of Brittany. They befriend the villagers, who dress in black, speak an ancient language, farm their own land, and shun television.

When Yves begins to change drastically- he flies into violent rages and forbids Marjorie to paint- their marriage begins to unravel and Marjorie moves to their home in Brittany to oversee the renovations on her own, taking Danielle with her. It is the unexpected friendship that she forms with Jeanne, a villager in her 70's who has lived in Brittany her whole life, that will help Marjorie to weather the emotional storms ahead.

A Gift From Brittany pays homage to a time and a place removed from the hustle and bustle of the world now. Life seemed so much simpler in Brittany- neighbors helped neighbors, church was still a priority, and sitting in front of the television wasn't an option for entertainment. Towards the end of the book Marjorie begins to mourn the loss of this way of life, as even Brittany caught up with the times eventually.

The friendship between Marjorie and Jeanne is what made this book so special. Despite the fact that Marjorie is in her early 30's when she meets Jeanne, they form a special bond. Jeanne is able to help Marjorie put things, especially difficult things, into perspective, and she is the one who helps Marjorie adjust to life in the country. In return, Marjorie provides Jeanne with new experiences, and a few things that will help make life for Jeanne less difficult. Both of them are left with a lasting friendship, one that will remain long after Marjorie leaves Brittany for good.

This was an enjoyable memoir, reminiscient of the way that things used to be. I greatly enjoyed reading about the people and the ways of Brittany, as well as the art that Marjorie created while in France, and recommend this to anyone who is either a fan of Marjorie Price's work, or of memoirs in general. Thank-you to the publicist for this review copy, and come back tomorrow for an interview with Marjorie Price as well as a giveaway!

Rating: 4 stars out of 5
Recommended to: Fans of Marjorie Price's art or art in general, memoir fans
Challenges: 2010 100+ Reading Challenge, New Author Challenge 2010
Posted by The Book Chick at 6:00 AM