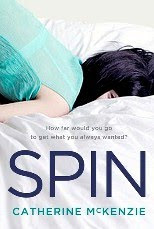 Kate Sandford is almost 30, but she still poses as a graduate student at times for the free food available at graduate events. She writes articles for the newspaper about obscure but interesting bands, and when she gets an interview at The Line, a music magazine that she has always aspired to work at, she is ecstatic. The night before the interview she goes out with friends to celebrate the combination of her birthday and the interview and, well, over-celebrates a little. She arrives at her interview the next day hungover, reeking like alcohol, and sick to her stomach and it isn't long before the interviewers politely dismiss her. Kate is devastated, but a few weeks later she receives a call. If Kate follows Amber Sheppard, the current celebrity "It Girl" into rehab and writes a tell-all after completing the program she will get another chance to work at The Line. Kate doesn't think twice and hops onto a plane headed for the rebab centre Oasis.

Things get complicated after Kate arrives. Even though she was convinced that she didn't have a problem with alcohol, her time in rehab is starting to open her eyes a little to her own destructive behaviour. Kate also manages to not just meet Amber Sheppard, but befriend her, and then comes the ultimate question: can Kate still write her article without losing her new friend? Kate also meets Henry, a celebrity handler, and sparks begin to fly. Will Henry be able to fall in love with a girl that he met in rehab, and can their relationship last outside of the walls of Oasis?

Spin is chick-lit with a heart, and I absolutely loved it. Kate Sandford is definitely one screwed-up individual at times, with the habit of leaping into things without thinking them through first, but she is the type of character that makes you root for her. Not only was I hoping that she would be able to truly see that she had a problem with alcohol, but I was hoping that she would start wanting to get better, and maybe even fall in love along the way. The secondary characters in Spin are fantastic as well: Amber appears to be a spoiled celebrity at first, but as the story continues we see that she's just a girl who has made some bad decisions, and has managed to make those in the spotlight while the world followed her every move. Henry, the celebrity handler, was fantastic as a guy who didn't need to be in rehab, but certainly didn't have it all together either. Kate's parents were wonderful as well- people who truly want to see the best in people, even if those great qualities are in hiding.

There's a line on the last page of the book that I found absolutely swoon-worthy. I would love to share it with you, but won't for fear of giving away the ending. What I can say is that debut author Catherine McKenzie has written a fantastically entertaining and funny yet endearing debut novel and I'm excited to read what she comes up with next.

Thank-you to Catherine McKenzie and HarperCollins Canada for this review copy. You can browse inside Spin here. Be sure to check back tomorrow when Catherine will answer a few of my burning questions, and I will have a copy of Spin to give away!

Rating: 4.5 stars out of 5
Recommended to: Chick Lit fans, and anyone looking for a fun yet thought-provoking read
Challenges: 2010 100+ Reading Challenge, New Author Challenge 2010, 2010 Chick Lit Challenge
Posted by The Book Chick at 8:42 AM