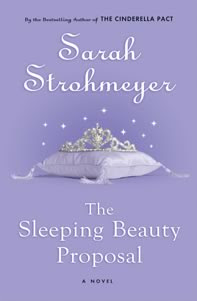 I picked this one up from the library after reading a review by Meg over at Write Meg!. When I picked it up I had the feeling that I had already read it (I mean, look at this gorgeous cover- who could resist?) and I was right. A couple of pages in I started to remember the important details of the book, but since this kind of book was exactly what I was in the mood for I decided to read it for a second time.
Genie Michaels is stuck at a dead-end- for the past four years she has been dating and catering to her obnoxious author boyfriend, Hugh, who has yet to propose to her, and yet she continues to wait. While Hugh is on a book tour he goes on a popular daytime TV talk show and proposes to his girlfriend- but the problem is that the girl that he proposes to isn't her! Everyone in Genie's life thinks that he's finally proposed to her, and Genie's best friend, Patty, tells her to leave everyone in the dark. Patty figures that if women getting married can get some extra loot, why shouldn't single women get the same treatment? Against her better judgement, Genie goes along with this and finds that being "engaged" has transformed who she is. Suddenly she's a better version of herself, better than she ever was when she was with Hugh. When Nick the sexy carpenter comes on the scene, things get complicated, but it's nothing that Genie won't be able to figure out eventually.
This was a great, light read about single women and how they are treated differently than engaged or married people. Primarily, though, this book was about not waiting around for a man, and instead being the best version of yourself that you can be. There's no reason that single women can't enjoy happiness, or buy a home, or throw a party or two! The moral of this book? Stop waiting around for the perfect man and enjoy the here and now! I would recommend this fun read to anyone who enjoys chick-lit or a light read now and then! Visit Sarah Strohmeyer's website for more information on this book.
Posted by The Book Chick at 10:54 AM