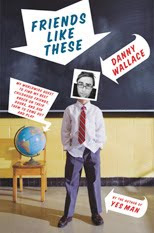 In Friends Like These, Danny Wallace is having a hard time dealing with his rapidly approaching 30th birthday. He's married, and he and his wife have recently bought a home, but he's having issues with home repair, display cusions, and generally getting older. After his parents send him a box filled with mementos from his childhood, he finds an address book with 13 names from his past. He decides to track down these thirteen people (with the permission of his wife, of course!) and his search takes him all over the world. He travels to LA and Tokyo, Berlin and Australia, all with the purpose of asking his old friends "Can you come out and play?". Along the way Danny is faced with some shocking revelations and some people who want to leave the past in the past, but ultimately he rekindles some valuable old friendships and finds that the entire journey was worth it.
This was a really funny book, and I wasn't surprised to find out that Danny is the author of Yes Man, which was eventually turned into the hilarious movie starring Jim Carrey. I enjoyed his tales of playing Xbox online with a 12-year-old, struggling to do his own home repairs, and even dressing up as a giant bunny. It was especially funny when I thought about the fact that my husband, right around when he turned 30, went through a similar journey himself. Although his journey didn't take him quite as far, we've recently reconnected with some people from his own childhood, some who have even become new friends of mine. It just goes to show you that it's never too late to look up an old friend. Thanks to Facebook I've even been able to catch up with a few old friends myself.
This book is a great read for anyone who has ever wondered about what all of their old friends are up to, especially if you enjoy a good sense of humour. You can read an excerpt of the book here. Thanks to the Hachette Book Group for this review copy!
Posted by The Book Chick at 10:34 AM