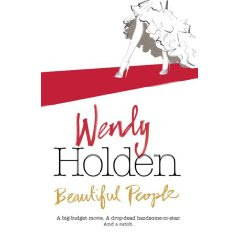 Emma is a nanny from Northern England who dreams of working in London. She knows that she's a darn good nanny with lots of experience, but will the family she ends up working with appreciate her? Belle is a self-centred, primarily plastic Hollywood mega-star on a downward spiral. She's desperate to claw her way back up to the top, but at what cost? Darcy is acting in unsatisfying theatre in England when she receives a call. A major Hollywood director has hand-picked her to be the star of his next major motion picture, Galaxia, which is supposed to be the next Star Wars. She heads down to Hollywood, but will she lose herself once she's there?
These are just a few of the characters in Wendy Holden's latest, Beautiful People. These people and more will all come together, make mistakes, and hopefully figure out their own happy ending.
Okay, lets start with the good things about this book; after I read Azur Like It, one of Holden's earlier novels and was disappointed, I worried that I wouldn't like this one either, but I did! There are lots of intelligent, interesting characters in this book, and the plot was certainly exciting! I loved Emma, the hardworking nanny, and Orlando, the beautiful boy who didn't like being beautiful. The ending was fabulous, with everything working out just the way I hoped that it would.
And now for the bad: this is a long book. Normally, this wouldn't bother me, but at parts the story would drag. The beginning was great (although a little confusing at times as we are introduced to all of the different characters, and there are many!) and the ending was perfect, fast-paced and exciting. The middle dragged. The same people or the same place would be described several times over by different characters, and their descriptions were very similar. The majority of the book takes place in Rocolo, a picturesque Italian village, and it got to a point (after the fourth or fifth description) where I thought "Okay! Enough is enough!". I had read the description of the village several times and although it sounded beautiful, I didn't need it described again. Considering that the book is 663 pages long, multiple descriptions were not needed, and I feel that they could have been cut out without losing anything of the plot. Despite the fact that the book was incredibly descriptive, it was well worth the read, and I wouldn't suggest that someone not read this simply because it dragged here and there.
Ultimately satisfying, like a big bowl of ice cream, this book is a great choice for anyone who enjoys chick-lit or has enjoyed any of Holden's previous books.
Posted by The Book Chick at 12:52 PM