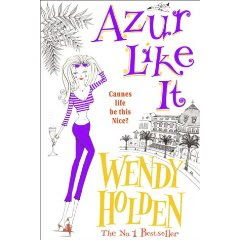 Kate is a journalist in her late twenties living in a small northern town. She lives with her parents and her Gran, she works on the small local paper, and she even went to school close by. In short, she's a little fed up with small town life and she's looking to inject a little glamour in her life. Then Kate meets Nat Hardstone, the good looking, yet slimy son of her demanding boss. Nat sweeps her off of her feet, and the next thing that she knows he's convinced her to come to the Cannes Film Festival with him (and to pay for his ticket!) to cover it for her paper. The problem is that Nat didn't exactly clear it with Kate's boss before she left, even though he said that he did. The other problem is that he ditches her before they even arrive. Kate must find a way to fend for herself away from home, and through a series of funny events, she may even find love and the adventure that she craved!
I picked this up at my library's book sale because I've read Wendy Holden's School for Husbands and thoroughly enjoyed it. I have to admit, though, that Azur Like It was not my favourite of her books so far. Kate was, in my opinion, was stupidly naive. She fell for Nat Hardstone despite that fact that he was clearly a slimeball from the beginning, even going so far as to lend him the money for his plane fare to the Cannes Film Festival. She may as well have stamped "gullible" on her forehead. That being said, I did warm up to Kate towards the end of the book, although it was the supporting characters that really did it for me. Gran, Kate's grandma and a ball of fire, was fantastic, and so was Darren, her hilarious co-worker. I also enjoyed the ending, which answered a lot of questions for me and was fun to boot.
All in all, I wouldn't run out and buy this one, but if you're looking for mildly satisfying chick-lit, this certainly fits the bill. It's a semi-enjoyable read about a girl who (eventually) learns to stand up for herself-well, a little.
Posted by The Book Chick at 10:50 AM