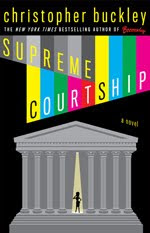 From the Publisher's Website:
"President of the United States Donald Vanderdamp is having a hell of a time getting his nominees appointed to the Supreme Court. After one nominee is rejected for insufficiently appreciating To Kill A Mockingbird, the president chooses someone so beloved by voters that the Senate won't have the guts to reject her -- Judge Pepper Cartwright, the star of the nation's most popular reality show, Courtroom Six.

Will Pepper, a straight-talking Texan, survive a confirmation battle in the Senate? Will becoming one of the most powerful women in the world ruin her love life? And even if she can make it to the Supreme Court, how will she get along with her eight highly skeptical colleagues, including a floundering Chief Justice who, after legalizing gay marriage, learns that his wife has left him for another woman.

Soon, Pepper finds herself in the middle of a constitutional crisis, a presidential reelection campaign that the president is determined to lose, and oral arguments of a romantic nature. Supreme Courtship is another classic Christopher Buckley comedy about the Washington institutions most deserving of ridicule."
About the Author:
Buckley is the author of eleven books, many of them national bestsellers, including Thank You For Smoking, God Is My Broker, No Way To Treat A First Lady, and Florence of Arabia. His books have been translated into over a dozen languages, including Russian and Korean.
Thanks to Valerie at the Hachette Book Group I have five copies of Supreme Courtship to give away! To enter:
1. Leave me a comment and include your e-mail address, so that I can contact you if you are a winner!
2. Bonus Entry: Become a follower and leave me a seperate comment letting me know that you now follow! Current followers are also eligible, just let me know that you already follow.
3. Bonus Entry: Blog about this giveaway, Twitter it, Facebook it, whatever! Just leave me a seperate comment letting me know how you've spread the word.
This contest is open to residents of the US and Canada, no PO boxes please! It runs until October 20, 2009 and on October 21, 2009 I will e-mail the winners. Good luck!
Posted by The Book Chick at 11:57 AM