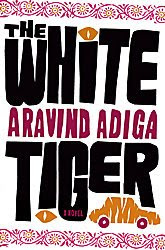 Have you ever been confronted with a book so many times that you feel that you were meant to read it? This is what happened to me with this book. I first glimpsed it at a Shopper's Drug Mart while on a rare solo trip. The cover intrigued me, and I wrote the title down so that I could remember to check to see if my library had a copy. It turns out that they did, although all of the copies were checked out at the time, so I put it on hold. While I was waiting for a copy, I won a copy of Aravind Adiga's newest novel "Between the Assassinations". A day after I received his newest book in the mail, the library called and told me that a copy of "The White Tiger" was in for me. I was thrilled to finally have a copy of this international bestseller in my hands!

"The White Tiger" tells the life story of Balram Halwai, a servant born in the darkness of India. Although he is born in the servant caste, he is determined from a very young age to rise above his station and become something different. He bucks family tradition by refusing to work in the tea shop that his brother works in and he trains to be a driver himself. He finds a job, by sheer luck, with one of the richest men, a "landlord", from his old village and from there he develops a plan to claw his way out from under India's low expectations of him.

The story was raw and full of anger from someone who was born in raised not as a rich man, but as a poor man. Throughout the story he is focused on having money, on bucking tradition, but most of all, he is focused on not being a servant anymore. He wants to be the boss. One reviewer, Andrew Holgate from The Sunday Times (London), puts it perfectly when he says "...there's not a sniff of saffron or a swirl of sari anywhere". This really was a novel about the poor and not the rich. I love reading literature set in the Middle East, and upon reflection I did realize that most of the novels I have read based in India are focused on the upper classes. This story was a refreshing deviation from the ordinary. I was engrossed throughout and I look forward to delving into "Between the Assassinations" very soon.
Posted by The Book Chick at 5:35 PM