"Fifty Is Not a Four-Letter Word" Linda Kelsey 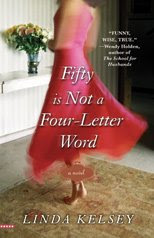 It's New Year's Day 2003, and also Hope Lyndhurst-Steele's dreaded 50th birthday. She's been long dreading this birthday in particular because she thinks that 50 is not the new 40; turning 50 just makes her old. As the editor of popular women's magazine Jasmine she's spent the last 20 years telling women that getting older is simply a badge of honour, yet she doesn't believe that herself. Little does she know what her fiftieth year will bring her: her son leaving home, being fired from her job, her mother's death, a close friend's unplanned pregnancy, and her husband's leaving her. As she struggles through her fiftieth year Hope learns a lot about who she really is and the tough stuff that she's made of. It turns out that turning 50 isn't that bad at all.

I enjoyed this book. It was more in depth than I was ancipating and it really brought home the point that regardless of your age, women need to be true to themselves and refuse to simply accept the status quo.
My only complaint would be that at times Hope would switch from talking about the present to talking about the past, without so much as a tense change or a change in font. When this happened I would be confused and would have to go over the last paragraph to try to figure out what was going on. Other than that this was a well-written, well thought-out read about women striving to make the best decisions that they can for their future. I would recommend it to anyone who's wondered what their own future holds, regardless of age.
Thanks to Hachette Book Group for this review copy!
Posted by The Book Chick at 8:16 AM