Review: "The Last Will of Moira Leahy" by Therese Walsh 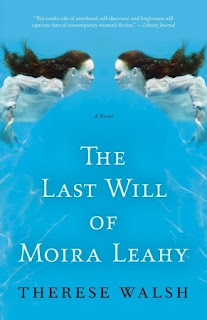 Maeve Leahy is a busy professor of languages at a University in New York. Scholarly and serious, she leaves little time in her life for memories and reflection, especially concerning her twin sister Moira, who she lost nine years ago.

When anonymous letters and a childhood relic that Maeve hasn't seen in years rock the foundation upon which she has built her current life, Maeve finds her long-buried memories surfacing and she finds herself travelling across the ocean in pursuit of the closure that she needs if she is going to break out of the shell that surrounds her life and truly learn to live.

The Last Will of Moira Leahy is told in two parallel narratives. One thread of the story tells of Maeve Leahy's present-day life, while the other recalls childhood memories of both Moira and Maeve. These narratives weave together seamlessly and beautifully, giving the reader a sense of Maeve's current predicaments and the background as to why she is the way that she is today.

What strikes me the most about this book is how beautifully it is written. Walsh chooses such beautiful words, such beautiful language, making this a book to be savoured slowly and read once again after you have finished it the first time. I loved how the words rolled off of the page, and I even found occasion to read some of the sentences aloud, just to hear how they sounded out loud. It's not often that I find books that are written so beautifully, so carefully, and I would recommend it on that point alone.

Walsh's book is on the reading list of Catherine McKenzie's Facebook group "I Bet We Can Make These Books Bestsellers", a group that encourages readers to come together and experience books that McKenzie feels have not received enough attention despite how good they are. I have agreed with the vast majority of her recommendations in the past and I wholeheartedly agree with this one as well.

If you're looking for a book written with the utmost of thought that has a compelling plot and an almost surreal conclusion, then I highly recommend picking up a copy of The Last Will of Moira Leahy.
Posted by The Book Chick at 5:00 AM