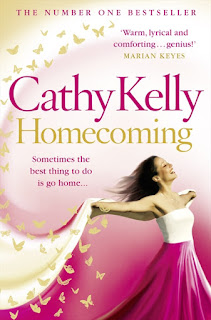 I generally prefer to write my own book descriptions, but this one says it better than I could, so this is borrowed from the publisher's website:

"Eleanor Levine left Ireland seventy years ago with little more than a suitcase and her mother's handwritten recipe book. Now, a lifetime later, she's returning from New York with hard won wisdom and memories of her own. A renowned psychoanalyst, Eleanor knows there's one final journey she has to make...

Lovely young actress Megan Bouchier didn't have to chase success - it arrived effortlessly. Fame was what she always wanted until a disastrous affair made her the wrong kind of headlines - now Megan needs a place to hide...

Darkly beautiful Rae is a wonderful wife, a loyal friend and a dedicated community carer. From Titania's Tea Rooms she dispenses tea and sympathy to everyone - until a painful secret from her past threatens everything she holds dear.

Big-hearted teacher Connie O'Callaghan has given up on love. She's cheerfully approaching forty and besides, why does no man ever match the heroes in her beloved romantic novels?

As Eleanor re-reads her mother's comforting words and watches life unfold from her window in Dublin's pretty Golden Square, she slowly becomes drawn into the lives of Megan, Rae and Connie. But can treasured wisdom handed down from mother to daughter really be relevant today? And what are the ingredients for a life well lived?"

I generally enjoy books with multiple plot lines (think Marian Keyes, some Jill Mansell) the best, but I did have a few problems this one. Homecoming is so intent on telling these four individual's stories in completion that I found it confusing at times. I found myself flipping back and forth through the book in order to figure out what exactly was going on, and I generally don't have that problem. I also found it to be a bit long for my tastes. Once again, I generally don't have a problem with long books as long as they've captivated me, but I found that this one lagged in the middle for me.

Overall it wasn't a bad book, just a book that posed some problems for me personally. The plots and characters were interesting and I would certainly give Cathy Kelly another try in the future. Perhaps it was just this one that didn't do it for me. My thanks to HarperCollins Canada for providing me with this review copy.
Posted by The Book Chick at 5:00 AM