Review: "The Bungalow" by Sarah Jio 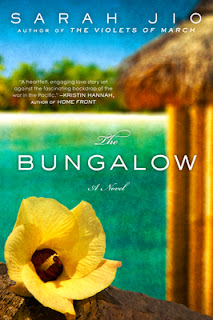 Having loved Sarah Jio's debut novel, The Violets of March, I of course jumped at the opportunity to read her newest release, The Bungalow, ahead of publication. The Bungalow releases on December 27th, and it's the perfect gift to pick up for yourself following the holiday rush. You spent all that time cooking and shopping and wrapping and preparing, so it's time for a treat for you, right?

Sarah Jio's second novel tells the story of 21-year-old Anne. It's 1942 and war has broken out. Anne is engaged to be married to the handsome and kind Gerard. It has always been expected that Anne and Gerard would be married as soon as it was appropriate. They are both from similar backgrounds and the match is acceptable for both families. As she hears news of her friends and acquaintances enlisting and leaving to serve their countries, Anne can't help but feel that she should be doing more than just getting married and producing babies. When Anne finds out that her best friend Kitty has signed up to serve in the Army Nurse Corps in Bora-Bora, Anne decides to put her own nursing skills to use and she signs up as well.

Anne and Kitty arrive on the island and immediately begin putting their nursing skills to work. It's busy there, but Anne feels useful and manages to make the most of her days. One day she meets a mysterious soldier stationed on the island named Westry, and the two happen upon an abandoned bungalow hidden by the beach. Anne and Westry's relationship quickly develops into something deeper, and as their secret bungalow changes, so do they.

Anne is convinced that she and Westry will find some way to make their relationship work even after the war ends, but when Westry is redeployed things are forever changed between the two of them.

I was immediately surprised at how quickly I was sucked into the plot of The Bungalow. Generally I'm not one for historical fiction, but I was engrossed by this story right away. Jio incorporates a good deal of history and background about the war into her pages but the information never becomes dull or dry, and I found myself wanting to know more. The Bungalow isn't just about history, though. She incorporates romance and scandal and heartbreak into the pages, making it likely to appeal to a wide range of readers. I especially enjoyed the parts of the book that focused on the friendship between Anne and Kitty. I imagine that war would change people in unimaginable ways, and it certainly affects the relationship between these two childhood friends in ways that I wasn't expecting.

My only criticism would be that the ending wrapped up too neatly for my tastes. The conclusion was a little too coincidental for me, but that didn't take away from my overall enjoyment of the book.

A story spanning many decades, and one that seamlessly switches between the past and the present, The Bungalow is a book that you won't want to read only once. My thanks to both the publisher and the author for sending me this review copy.
Posted by The Book Chick at 11:25 AM