Review: "All Is Bright" and "Love, Accidentally" by Sarah Pekkanen 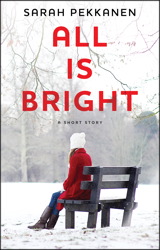 When Sarah Pekkanen generously offered her readers a chance to win one of 500 copies of her newly released short story, Love, Accidentally, you can bet that this book blogger was frantically waving her hand and screaming, "Pick Me! Pick Me!". I'm a huge fan of Sarah's and I'm eagerly awaiting the release of her next book, These Girls (coming in 2012 to a bookstore near you!), so I was happy to have something to tide me over until then. Since I had yet to read the short story that Sarah released last year (the latest story works independently, but complements her first one), I bought that and settled in for a good read (or two!).

All Is Bright is the story of Elise. Having recently split up with her childhood sweetheart Griffin because she loved him, but not enough, she is mourning the loss of his mother from her life. Having lost her own mother when she was young, Elise was able to depend on Griffin's mother for the comfort and support that she so desperately needed growing up, and Elise is unable to think of a future without her. 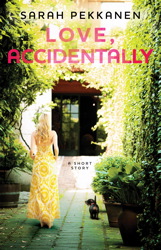 Love, Accidentally is the story of Ilsa, Griffin's new girlfriend. After a chance encounter with Griffin leads to one of the best dates of her life, Ilsa finds herself falling head over heels for him. However, will dealing with her sister's crumbling marriage and Griffin's ex-girlfriend's presence in their lives be too much for the new couple to endure?

I truly enjoyed both of these stories. They were both so well-written and I would love to see these stories weave their way into a full-length novel. My only complaint is that both were too short. I would have loved the stories to be 40 or 50 pages long each rather than the 20 or so that they both ended up being. It's not that Sarah didn't adequately tell the story in that length, because she did, but that it felt like it was over before I had gotten a chance to really get lost in it.

The real treat for me was the two-chapter teaser for These Girls included with Love, Accidentally. Reading the preview made me want to drive over to Sarah's house and wrestle a manuscript from her. She can, without a doubt, write and I'll be the chick spending all day reading it the day that it comes out.

All is Bright and Love, Accidentally are both available as eBooks right now.
Posted by The Book Chick at 8:21 AM