Review: "The Recessionistas" by Alexandra Lebenthal 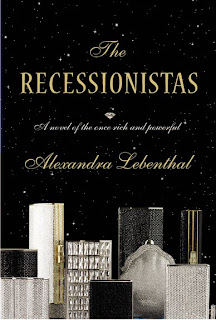 It's the day after Labour Day, 2008. Grigsby Somerset, a well-known socialite with an investment banker husband is busy trying to get her daughter, Bitten, into the best school in New York. Little does she know that the economy, once stable, is crumbling around her and that her fortune may soon be dissolved into rubble. She's also unaware of the fact that her husband, Blake, is about to enter into a dangerous deal with the notoriously difficult hedge fund owner John Cutter. Renee Parker, a girl from the wrong side of the tracks who has been steadily working her way towards success, gets hired as John's assistant and when she begins to suspect that something is amiss she will stop at nothing to uncover the truth.

The Recessionistas looked so promising. I know that I shouldn't judge a book by its cover, but this one was particularly clever. Look closely and you'll see that the skyline of New York is made up of purses and handbags. The plot sounded promising as well. Good vs. evil, the little guy triumphs, what's not to like?

The plot, thankfully, didn't disappoint. The story was fast-moving and interesting and I was at the edge of my seat, hoping that good would triumph in the end. Even the characters, many who were spoiled and surrounded with an air of entitlement, were entertaining. I didn't particularly like any of them (with the exception of Renee), but I had fun reading about them and their so-called "problems" (as if it's actually a problem when you have to spend hours each week grooming while nannies, maids, and cooks take care of your household).

What I couldn't get past was the fact that The Recessionistas was plagued by awkward dialogue. It felt stilted and stiff, even for this plastic New York crowd. When I read a book I want the words coming out of their mouths to feel true to the character themself. I want to be able to hear them in my head, but I just couldn't get a handle on them while reading their conversations. I especially had a problem with Renee's voice. It just seemed unnatural, and it hindered my understanding of her character.

Another problem that I had with the book, and this one is minor, is the amount of explaination about hedge funds and Wall Street that dominated parts of the first half of the book. I'm horrible with math and financial transactions, I didn't understand anything about hedge funds even after I had read these parts. I don't mean to come off as being ignorant, but I would have been happy for this information to have been left out. This will not be the case for everyone, as some people will be able to understand the technical explainations, but it was certainly the case for me.

The book had potential, but it ultimately fell flat for me. It's too bad, because there were parts in here that were enjoyable, particularly the ending.

I received a copy of this book courtesy of The Hachette Book Group in exchange for an honest review.
Posted by The Book Chick at 5:00 AM