Review: "The Catcher in the Rye" by J.D. Salinger 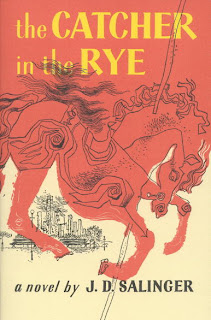 For some reason, I've never read The Catcher in the Rye. I switched high schools in the summer after grade 10, so although I got stuck reading The Lord of the Flies twice, I've never read J.D. Salinger's classic novel. Reading it became so much more important when my husband and I named our son "Holden", and many people asked if we had named him after the famed literary character. We didn't. So, when Mandy, my virtual friend from Mandy's Life After 30 spent a month reading classics as a personal challenge to herself, I decided to finally read The Catcher in the Rye, and she decided to read it along with me!

The Catcher in the Rye is the story of 16-year-old Holden Caulfield. He's just been kicked out of yet another boarding school for failing, he finds his roommate annoying, and he's in trouble with the fencing team because he left their foils on the subway and they had to forfeit their game. It's right before Christmas vacation, and rather than sticking around, he decides to head back to New York, where his parents and little sister live (older brother D.B. is a screenwriter in Hollywood). He doesn't want to return to his parent's apartment, though, because they don't yet know that he's been kicked out and he isn't due home until Wednesday. So, he takes the money that he's been sent by his senile grandmother, rents a hotel room, and spends time wandering around New York, calling up previous friends and teachers, getting drunk, and generally wasting time. We later find out that after all of his wandering he ends up in a psychiatric hospital, dealing with his psychiatric issues.

Can I admit (without being booed out of blogging-land) that I just didn't get this novel at first glance? I understand that it's a classic, I understand that it has been studied in high schools around the world, but I just didn't get it. Perhaps I would have understood it better if I had read it as a teenager, rather than as an adult. The frequent profanity didn't bother me (although this is the reason that many parents have lobbied to have it removed from school curriculum), but I just found myself thinking "when is something going to happen?".

I'll be honest: this is something that I have little desire to read again, but I am glad that I read it. Now when someone asks me "Did you name your son after Holden Caulfield?", I can tell them that I didn't, but I will at least know more about the literary character that they are referring to. Plus, I broadened my reading horizons!

Other Reviews:
Josette at Books Love Me
Posted by The Book Chick at 7:21 PM