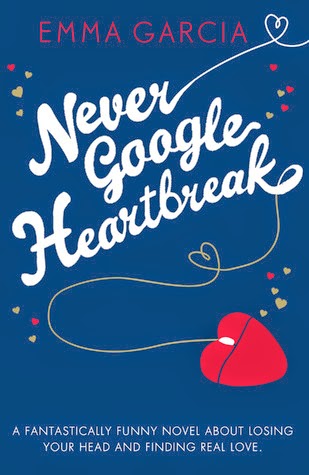 When her fiance Rob breaks off their engagement for the third (!) time, Viv does what any sensible woman would do and she moves out. Secretly she's hoping that her bold move will bring Rob to her doorstep, begging her to reconsider, but when weeks go by with no word from him Viv is forced to come to the conclusion that reconciliation isn't in the books.

Viv falls to pieces and she's lucky when best friend Max is there to put her back together. Viv discovers that Max has had feelings for her all along but she's not quite sure what to do with that information. Her feelings for Rob are still there and she can't seem to shake them. After a few disastrous turn of events Viv finally discovers what it is that her heart has wanted all along, but is it too late to get the love of her life back?

I loved, absolutely loved, Never Google Heartbreak! It had it all- a romance worth cheering for, a villain of epic proportions, a few funny situations, some decidedly steamy scenes and an ending that left me wanting more. It is my second-favourite book of the year so far! I had a hard time putting it down, and I couldn't wait to find out what happened next. Sure, some of the story was over-the-top and not likely to happen in reality, but that was part of what I loved about the book- it offered me an escape from the everyday.

I don't often refer to others' reviews in my own. Quite frankly I believe that we are all entitled to our own opinion and I think that's what makes book reviewing so interesting, but in this case I found it hard to believe how many people did not enjoy this book when I enjoyed it so much! Some reviewers who did not like the book didn't like it because they found the main character, Viv, irritating. It's true, she did have some irritating qualities, but I think these were present because she was so lost in her own life. Her job wasn't one that she truly loved or even excelled at- she was just going through the motions. Her idea of what love should be had no resemblance to what would actually make her happy, it was just an idea that she had in her head of what she thought that she wanted. I think that Viv was confused, and part of the charm of Never Google Heartbreak was that she was finding her way to happiness by slowly discovering what it was that she wanted, even if some of her choices initially had disastrous consequences.

My one complaint about the book was that Viv decides to create a website called Never Google Heartbreak for those who are heartbroken. Despite the fact that this is where the title comes from, I found that the concept wasn't fully formed throughout the book and the site remained irrelevant to the story in my opinion. There was enough going on that the site didn't feel like a necessary addition and I'm sure that the story would have flowed just as well without it being a part of it.

A true testament to how much I loved Never Google Heartbreak is the fact that I finished it, found out that there was a sequel, and then bought it the same day. If I really love a book I can't wait to find out what happens next! This book was funny and sweet and even thought-provoking at times, and it is a charming story about what to do what you have no clue what you're doing. My thanks to the publisher for providing me with a review copy of this book!
Posted by The Book Chick at 3:01 PM